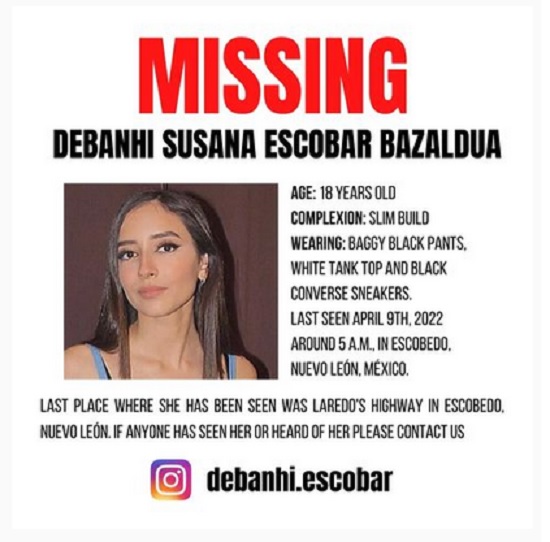 A haunting last photograph of a missing Mexican woman has emerged on social media and is getting widely circulated, drawing attention to the wider problem of missing women in the country.

Debanhi Escobar, 18, was last seen on the night of 8 April in Nuevo León, Mexico, when she took a cab after partying with her friends. She was reported missing the next morning by her parents who noticed that she did not return home.

A cab driver, identified only by his first name Jesus, had allegedly asked the 18-year-old to deboard following an argument and left her in the middle of the road that led to the Tamaulipas border town of Nuevo Laredo early morning on 9 April.

Now a photo has emerged online that shows the 18-year-old standing on a highway alone, wearing a crop top and a skirt, with her hands folded as she looks down the road.

The haunting photograph, clicked by the driver moments before she disappeared, was sent to her friends as proof that she was alive when he asked her to leave at around 5 am on 9 April. The photograph was now made public on her Instagram account where updates relating to Ms. Escobar’s disappearance are being shared.

The 47-year-old driver, who one of Ms. Escobar’s friends had called to drop her off, has been arrested by the police on Tuesday under charges relating to drugs and for more information on the 18-year-old’s disappearance.

The driver, who worked for a ridesharing service, had his app turned off during the trip and was called as he was trusted by the friend. However, according to local media, he had been investigated for harassment and attempted kidnapping of women in the past.

Ms. Escobar was seen entering the site of Alcosa Transportes Internacionales, a trucking company, moments after the driver left her stranded in the surveillance camera footage. However, she was never seen exiting the cargo company site.

Authorities have been carrying out a frantic search to locate Ms. Escobar, who has become another addition to the long list of missing women in Mexico.

Seven women are reported missing in the country every day with most cases centered in regions of Mexico State, Morelos, Jalisco, and Nuevo León, according to data analyzed by Mexico’s National Missing Persons Commission.

At least 18 alerts were issued for the disappearance of young people in the entity in the first quarter of 2022, a list that includes minors between 12 and 15 years of age.