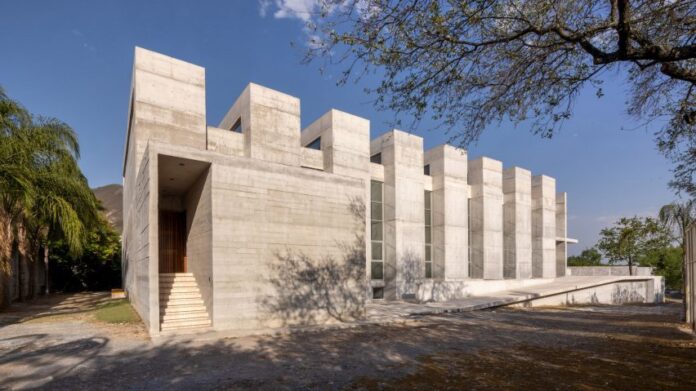 This minimalist chapel outside of Monterrey in northern Mexico by WRKSHP was designed with a limited palette of materials that allow natural light to define the spacious interiors.

Fuego Nuevo chapel was completed earlier this year, after the firm was commissioned directly by the congregation of El Uro, on the outskirts of Monterrey. The area is set at a high altitude, surrounded by the Sierra Madre mountain range.

WRKSHP was initially engaged for the project in 2014, and spent the subsequent years working closely with the community to design the 1,265-square-metre chapel.

“Many of the church’s resources have come from donations from parishioners and some foundations, so we also aimed to work with low-maintenance materials that could age with dignity,” explained the Monterrey-based architects. “When the project was presented to the community, it was very well received.”

The project is laid out on two levels. A partially sunken lower floor is accessible directly from the street, and contains a multi-purpose room and the ossuaries at the back of the space, which are meant to be the most private areas of the building.

Above the multi-purpose room, the architects created an elevated plaza that worshippers reach via a long ramp along the facade. “Here, an evergreen oak was planted that was donated by the community,” they explained.

The entrance to the chapel is from this new plaza. The main facade is made of board-formed concrete, a material that references Monterrey’s industrial heritage.

The nave is a double-height space that is defined by the deep structural beams that span the width of the chapel. This design allows for a layout without intermediate columns. Related story Prison inmates help build cracked-open Church of the Penitent Thief in Italy

“[The structure] remains as bare and heavy elements [that] are constantly repeated, generating a rhythm of solids and voids that allows natural light to play its role as a protagonist,” said WRKSHP.

Between each column, tall glass walls offer views of the surrounding mountainous landscape.

The beams, meanwhile, also integrate clerestory windows that bring even more light to the interiors.

The altar was designed in collaboration with local craftsman Alfredo Zertuche. A large black slab of Monterrey marble was sourced from a nearby quarry in Cerro del Topo Chico, and is backed by a curved wall of wooden slats made of walnut.

Concrete and travertine feature in other religious buildings, including a church topped with a concrete dome by Atelier Štěpán in Brno and a church that was built as part of a larger complex in Castel di Lama, Italy, and is modeled after traditional Italian town centres.

By James Brillon for Dezeen