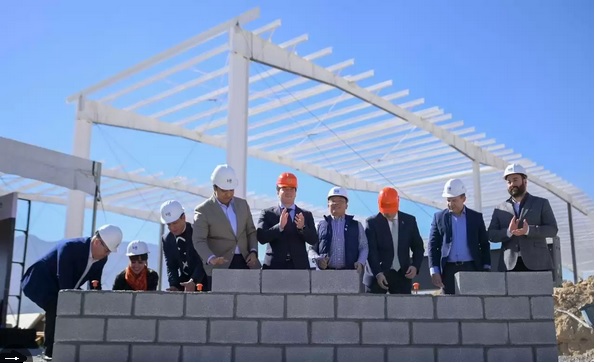 With an investment of US $100 million, the Chinese company Noah Itech started construction on Monday of its first factory in Mexico. It will produce automation equipment and is scheduled to be operational by May.

Located in Santa Catarina in the metropolitan area of Monterrey, Nuevo León, the plant will generate 100 highly specialized jobs close to the location reportedly planned for Tesla’s new vehicle plant, also in Santa Catarina. Tesla is one of Noah Itech’s main clients along with General Motors, Facebook, and Google.

Governor Samuel García remarked during the placement of the plant’s first stone that with these investments, Nuevo León’s recent trend of announcing the arrival of a new company every week continues. “These investments arrive [in Nuevo León] because we know how to sell ourselves to the world. They are not going to come here by themselves,” he explained.

During his statement, García added that the municipality of Santa Catarina is part of the Saltillo-Monterrey corridor, which allows a quick exporting process to the United States. With the arrival of Noah Itech’s plant, he said that Nuevo León’s government has committed to improving the peripheral road and the beltway to Laredo, Texas.

The State Minister of Economy Iván Rivas pointed out that investment arrives in the state owing to its infrastructure and its human capital, which is the “best-prepared workforce in the country,” he said. According to the state government, 15,000 engineers and scientists graduate in Nuevo León every year in addition to 20,000 technicians from local universities.

Fang Te Chou, deputy manager of Noah Itech México, said that they chose Nuevo León due to its growth potential owing to its incomparable visionary spirit. “We firmly believe that this land is the right place to carry out our development,” he said.

There’s also a tax incentive associated with the payroll tax (ISN), and if they export through the Colombia Bridge (one of four international vehicular bridges located on the United States-Mexico border in the city of Laredo, Texas) there is a stimulus available to offset toll fees, Mexico Industry reported.