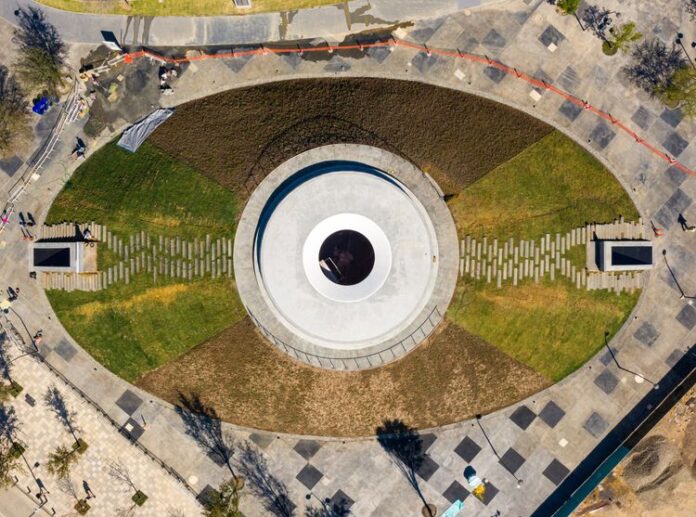 ‘This is not my light and in fact, this is not my experience. It’s yours. This is a piece of the Tec de Monterrey. In the end, I leave her and the people who are here will know more about her than I do,’ Turrell said.

Located in Central Park’s Plaza Floramiento, the work comprises an oval-shaped mound of earth with an open aperture that presents a circle of the sky to viewers inside the Skyspace. A sequence of lights shone on the installation’s ceiling creates contrasting colors that change the viewer’s perception of the sky.

The project was commissioned by DistritoTec, an innovative urban development project led by the university, and developed with the Tec de Monterrey Arts Initiative, and the AC Art Laboratory. It was produced by Mexico City gallery OMR in collaboration with Zurich’s Häusler Contemporary.

‘Through this installation, the mission of DistritoTec is strengthened, which is committed to art as a way to promote coexistence, provoke encounters, generate innovative ideas and promote human flourishing,’ DistritoTec said in a statement.

On 18 February, the Pabellón Expositivo Arte A.C. opened the exhibition James Turrell: Espíritu de Luz to share how the project was created and constructed.

Skyspace: Spirit of Light is the third of Turrell’s Skyspaces in Mexico. The others are in the botanical gardens of Culiacán, Sinaloa, and the Tree of Light Amphitheatre in Yucatán.

Turrell now has over 90 Skyspaces worldwide. Other galleries Turrell frequently collaborates with include Pace and Almine Rech. —[O]

James Turrell is an American artist known for his work within the Light and Space movement. Much of Turrell’s career has been devoted to a still-unfinished work,

Hell & Heaven 2022: announce that you will be able to camp at the festival

What is Elon Musk doing in Nuevo Leon?

For the first time in 102 years, women enter the Indio Azteca cantina in Monterrey