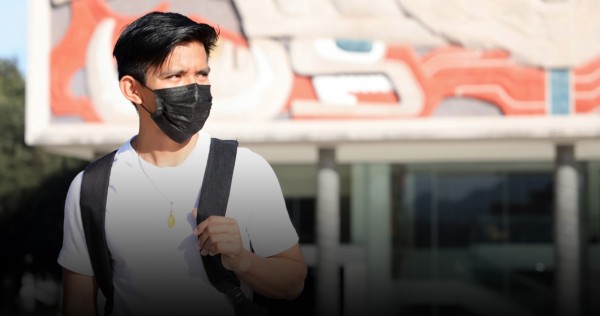 Jerónimo Moreno, awarded a 100% scholarship to study at Tec, now seeks to give back his knowledge to help the community in Chiapas

“When I arrived at Tec in Tuxtla, I spoke very little Spanish,  because I  spoke Tzeltal every day; It was difficult for me to explain what he meant. “

This is how Jerónimo Moreno remembers when at the age of 18 he began to study the career of Strategy and Business Transformation at the Tec de Monterrey Chiapas campus, without mastering the Spanish language.

The young man spent his childhood in the town of  Bachajón, where everyone communicated in the Tzeltal dialect, typical of the communities in the mountainous regions of Chiapas.

Thanks to his academic excellence from elementary to high school, his participation in social projects, and being a state chess champion, Jerónimo received the opportunity to enter the  Leaders of Tomorrow program to study 100% with a scholarship at Tec.

Now, the recent graduate of the Monterrey campus also speaks English and recounts what it was like to change cities and enter the university without mastering Spanish,  in the hope of transforming his community.

“Being a Leader of Tomorrow means a vote of confidence that donors, collaborators and Tec place in us”.

“I thought they weren’t going to accept me”

Jerónimo acknowledged that upon entering Tec he was afraid of not being accepted, but the kindness of his classmates, his effort to learn Spanish, helped him get ahead.

“Before arriving at the Chiapas campus, I  thought they would not accept me, but I was surprised that despite the difference in languages, people had that kindness and time to try to understand me, ” he says.

He talks about how he had some notions of Spanish thanks to his father and his high school teachers.

Upon arriving at Tec, he practically learned to master Spanish thanks to remedial courses, designed to level his level of knowledge with the rest of his classmates.

“They helped me a lot because I went through all the grammar rules. Furthermore, I was already in a context where I needed to master Spanish all the time:  the talks, the books, the participations, the transportation, everything was in Spanish ”.

In addition, the Leaders of Tomorrow program,  which supports talented young people to study 100% with scholarships at the institution thanks to their talent and social leadership, supported him during his studies at Tec.

Jerónimo remembers the words his mother said to him when he had to leave.

“He told me: ‘Don’t be sad; it’s for your good.’  It was what cost me the most: saying goodbye to my family, especially my mother, because she motivated me to prepare; although she did not finish primary school, she always told me that education was very important. “

Being the seventh of 9 siblings, Jerónimo had never left his parents’ house in the municipality of Chilón, located 5 hours by car from Tuxtla Gutiérrez, the state capital.

“Every end of the semester I went to my town and tears came to my eyes when I had to return. It was a necessary sacrifice because my mother wanted to see me with a title.  She knew that in the country life is very difficult.

“Every end of the semester I went to my town and tears came to my eyes when I had to return. It was a necessary sacrifice because my mother wanted to see me with a title. “

Another challenge he had to face was the fear of getting lost in the city.

“Going to a city much bigger than my town filled me with fear, mainly it was the fear of getting lost because I did not know the routes nor did I know (speak Spanish); I had never been to Tuxtla. Fortunately, one of my brothers already lived there and he was the one who helped me.

“I had to get lost sometime because there was a bus that had the same name, but it had two routes and I took one that was not,” he recalls with a laugh.

Graduates with English and fulfills a sister’s dream

The Leader of Tomorrow will be part of the generation of graduates in December 2021 from the Tec Monterrey campus,  after 6 semesters, the same ones that he studied first at the Chiapas campus.

Currently, the Chiapas student is not only fluent in Spanish but has also learned to speak English.

“At Tec they taught me business-focused English. I started using terms that I didn’t even know in Spanish and I had to learn them. T ve online courses with different universities. In the summers, they usually invited professors from British Columbia University. “

The young man relates that he met Tec de Monterrey when one of his sisters wanted to enter the institution; however, she was unable to secure a scholarship and it was difficult for her family to be able to afford her college education.

“I knew about Tec since the end of elementary school. When I was older, I was checking different calls for scholarships, but none could be covered by my family. They told me to look for other options.

“A year before leaving high school, I found out about the Leaders of Tomorrow scholarship;  my math advisor tipped me off. I always had the vision of doing everything possible to win it because I wanted to fulfill my sister’s dream through me ”.

Participate in social projects focused on your community

Jerónimo actively participated in social programs, seeking to improve his community. Well, he wants his people to do better.

From a very young age, he realized the difficulties faced by the inhabitants of his region:  large families and work in agriculture focused on the cultivation of corn, beans and bananas barely gave what was necessary to survive.

This is how he focused on developing a project to benefit his community.

“With several friends and my father we developed a project called Constrúyete, which was about making backyard vegetables, that is, in the same family home, so that in addition to beans and corn, they could harvest the vegetables that they did have. what to buy.

“It occurred to us that we had to produce those products that were not generated in the field. We managed to harvest products such as tomato, coriander, chives, chili, and other things; There were about 50 families that we’re able to satisfy their needs and sell the surpluses ”, he said.

That social conscience, his good grades, and also his passion for chess, since he was a state champion and promoted this sport in his town, led Jerónimo to obtain a 100% scholarship to study at Tec de Monterrey, where he continued to support causes. social.

“When I told my parents that I had been accepted they cried with emotion and congratulated me, but my father told me something very important: ‘Son, this fills me with pride, but remember that it is not only an award but a commitment because the Tec is trusting you. ‘

“My dad told me something very important: ‘Son, this fills me with pride, but remember that it is not only an award, but a commitment, because Tec is trusting you.'”

He seeks to return to improve his community

Jerónimo tells what his next goal will be: to find a job opportunity to pursue the career for which he prepared.

“I would like to work for a few years with the aim of having a lot of experience. One of my goals is to return to Chiapas and bring technology there, for example, for sustainable agriculture, so that the land becomes more productive.

“Being a Leader of Tomorrow means a vote of confidence that donors, collaborators, and Tec placed in us. It is an opportunity to show that we can do our bit to transform society ”, he concludes.

There will be boxing camp in San Cristóbal de las Casas