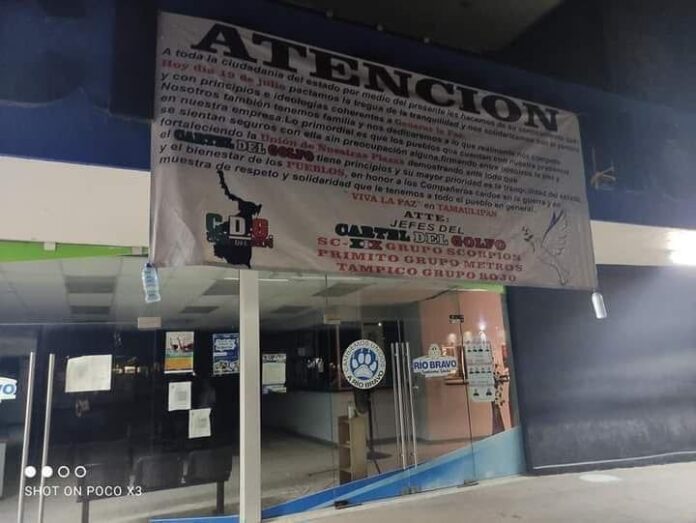 Alleged members of the Gulf Cartel posted messages in the most important areas of Tamaulipas, to announce a truce in the war they maintain with other criminal groups for the territory.

What do the “narco banners” contain? They are signed by Los Rojos, Los Metros, and The Scorpions, three of the cartel’s factions, printed in three colors, with a message in favor of operating their criminal businesses with less blood.

What was said? The Tamaulipas Public Security Secretariat confirmed their existence on Monday and indicated that four people allegedly responsible for hanging them on bridges or buildings were arrested.

With the slogan of ” Long live peace in Tamaulipas ” and the initials of the Gulf Cartel on the map of the state, the group made its announcement after the internal struggle for control of the territory and illegal traffic, which left thousands of narco fatalities.

“We also have family and we will dedicate ourselves to what really concerns us, to our company The Gulf Cartel has principles and its highest priority is the security of the state and the well-being of the peoples ”.

Similar narco banners were deployed in public spaces in municipalities such as Reynosa, Matamoros, San Fernando, Méndez and Burgos.

This Monday’s messages were posted overnight in nine cities of the state, including its capital, Tampico, and its most important border towns, Nuevo Laredo, Reynosa, and Matamoros. They were signed by the Reds, the Metros, and the Scorpions, three of the cartel’s factions.

These banners, popularly known as narco mantas, are usually used by criminals to claim executions and threaten opposing groups or even the security forces. Now they were printed with the slogan “Long live peace in Tamaulipas” and with the initials of the Gulf Cartel on the map of the state.

This organization is the most deeply rooted criminal group in Tamaulipas. At the beginning of the 21st century, those who were his armed wing, Los Zetas, split and a bloody war began between them. Later, both organizations divided among themselves again creating cells that operate independently and internally clash.

Currently, the successor group of the Zetas, the Northeast Cartel, is the main enemy of the Gulf Cartel.

Óscar Santiago Quintos, head of the analysis and intelligence department of the Mexican federal prosecutor’s office, explained in a recent interview with AP that organized crime in Tamaulipas currently operates through those small cells that have very local control and become “facilitators or merchants of the geographic space ”, that is, they charge other criminal groups for crossing their merchandise there.