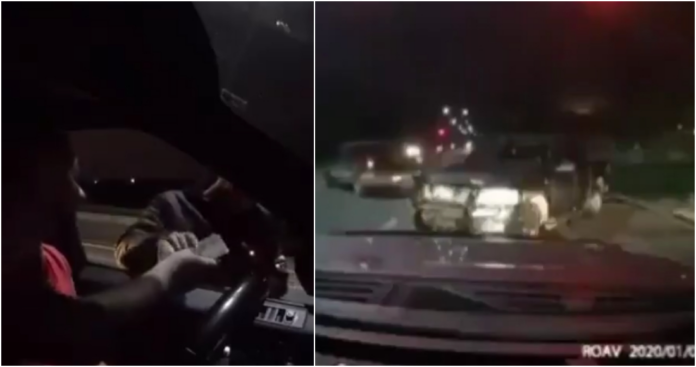 “The worst days of the War on Narcos” return to northern Mexico: shootings and disappearances spread terror

The Nuevo León state government acknowledged 10 days later that it had received reports of 14 missing people on the road so far in 2021 (Photo: Twitter / @ CODIGO_NEGROMX)

Up to 50 people are missing after starting three-hour car trips this year between the Mexican industrial city of Monterrey and the city of Nuevo Laredo, on the border with the United States, on a well-traveled stretch of highway that local media have reported. dubbed “the highway of death.”

His relatives claim that they simply vanished. Such disappearances, and last week’s shooting of 15 seemingly innocent bystanders in Reynosa, indicate that Mexico is reverting to the dark days of the drug war from 2006 to 2012, when cartel gunmen used to attack both ordinary people and people. currents as between themselves.

“It is no longer between them, the cartels are attacking citizens,” said activist Angélica Orozco.

Up to half a dozen of those missing on the road are believed to be US citizens or residents, although the US embassy in Mexico could not confirm their status. One of them, José de Jesús Gómez, a resident of Irving, Texas, allegedly disappeared on that highway on June 3.

On Saturday, the FBI office in San Antonio, Texas, published a bulletin requesting information about the disappearance of Gladys Pérez Sánchez, a woman from Laredo, Texas, her 16-year-old son and her 9-year-old daughter, who were last seen. on June 13 when they hit the highway. They had visited relatives in Sabinas Hidalgo, a town on the highway, and were returning to Texas when they disappeared.

Nuevo Laredo has long been dominated by the Northeast Cartel, a remnant of the former Los Zetas Cartel, whose members were known for their violence. (Photo: EFE / STR)

Most of the victims are believed to have disappeared while approaching or leaving Nuevo Laredo, a city dominated by the cartels and bordering Laredo, Texas. About half a dozen men have reappeared alive, savagely beaten, and all they said is that armed men forced them to stop on the road and took their vehicles away.

What happened to the rest, including a woman and her two young children, remains a mystery. Most were residents of the state of Nuevo León, where Monterrey is located. Desperate for answers, relatives of the disappeared took to the streets of Monterrey on Thursday to protest, demanding answers.

Orozco, a member of the United Forces for Our Disappeared organizations, said the kidnappings seem to mark a return to the worst days of Mexico’s drug war, such as in 2011, when gunmen from a cartel in the neighboring state of Tamaulipas took out innocent bus passengers to fight each other to the death with sledgehammers.

Then, as now, politicians and prosecutors have given few answers to the families of the disappeared.

“They are supposed to have created institutions, procedures, but the story repeats itself that the authorities do nothing,” he lamented.

United Forces for Our Disappeared issued a press release on May 19 warning of the dangers on the highway between Monterrey and Nuevo Laredo, when by mid-May the group had only received about 10 reports of missing persons there. More reports came in in June and now number about 50.

The Nuevo León state government acknowledged 10 days later that it had received reports of 14 people missing on the highway so far in 2021, along with five more in the neighboring state of Tamaulipas, where Nuevo Laredo is located.

However, Nuevo León did not warn people traveling on the highway until June 23, almost a month later.

The warning came too late for Gómez and Javier Toto Cagal, a 36-year-old truck driver and father of five who disappeared on June 3 along with three other employees of the same transport company on the 220-kilometer (135-mile) stretch. miles). They were driving to Nuevo Laredo in a car.

“Until now, they don’t know anything about them … It’s very murky,” said Erma Fiscal Jara, Toto Cagal’s wife. “It was not until June 5 that the company informed me that ‘her husband is missing.’ With the authorities, so far nothing. I ask and they say ‘we don’t know’”.

It wasn’t until Friday that the two governments announced a joint program to increase vigilance and safety on the road, a measure that, had it been implemented a month earlier, would likely have saved dozens of lives.

United Forces for Our Disappeared issued a press release on May 19 warning of the dangers on the highway between Monterrey and Nuevo Laredo (Photo: EFE)

“The National Guard is hardly going to patrol the road. I don’t know why they waited so long,” asked Karla Moreno, whose husband, truck driver Artemio Moreno, disappeared on April 13 on the highway.

She, too, is terrified that northern Mexico will repeat the experiences of a decade ago.

“How can this be happening? Right now, it is assumed that there are more resources (police)”, he commented.

Long, Nuevo Laredo has been dominated by the cartel in the Northeast, a remnant of the old Zetas cartel, whose members were known for their violence.

Alejandro Hope, a security analyst for Mexico, said the highway disappearances and the June 19 events in Reynosa – when gunmen from rival cartels drove through the streets, randomly killing 15 bystanders – were reminiscent of attacks on civilians during the war on drugs from 2006 to 2012.

Monterrey, NL- Army elements participate in the Safe Highway operation, in order to protect travelers who, travel along federal highway 85, in the Monterrey-Nuevo Laredo section, reported the commands of the Fourth Military Region and Seventh Military Zone, based in Apodaca, Nuevo León.

The actions, which are carried out as a result of a series of criminal acts such as disappearances and assaults on drivers who travel on the aforementioned roads, are carried out within the National Peace and Security Plan 2018-2024.

The Commanderies of the Fourth Military Region and Seventh Military Zone reported that “this strategy aims to implement the security of federal highway No. 85 in the Monterrey-Nuevo Laredo section, permanently 24 hours a day, thereby which seeks to eliminate the criminal activities that have occurred in this important communication channel”.