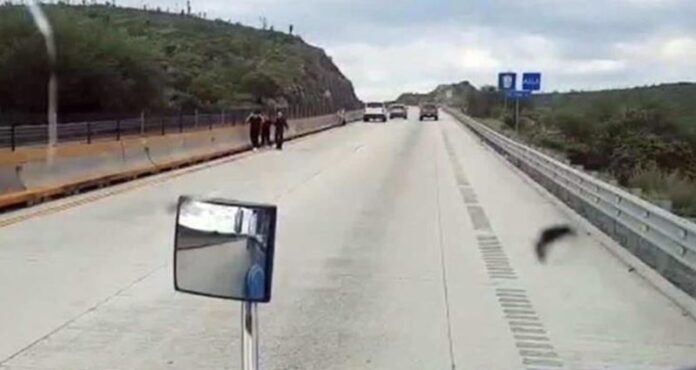 A family lived moments of anguish after being stripped of their truck while traveling on the Monterrey-Nuevo Laredo highway, moments that were captured on video by a trailer that was circulating on the road.

In the nearly 60-second recording, three trucks can be seen while the victims, a couple and two young men walk in the opposite direction glued to the dividing wall.

Moments later and despite the risk situation, the operator of the heavy unit went down and did not hesitate to approach those affected.

“Are you okay?” the trailer asked, as the family’s faces reflected the scare they went through.

According to the report of the facts, the criminals committed the robbery at the height of the mamulique slope, in the municipality of Salinas Victoria, Nuevo León.

In view of the wave of kidnappings recorded on the Monterrey to Nuevo Laredo Highway, the Governor of Nuevo Leon, Jaime Rodriguez Calderon, asked the citizens not to travel to Tamaulipas given the situation of insecurity that is being experienced.

In an unprecedented event, the Governor asked the inhabitants of Nuevo Leon to travel only if strictly necessary.

“Yes, it is public what is happening in Reynosa, and then suggest to the population of Nuevo León that they avoid (traveling) if it is not urgent that they have a return, that they wait until everything is calm … In this case it is a suggestion that we avoid at this time (travel) until we see that everything is quiet in Reynosa, there are people who have to travel for work, well, first they know that the Secretary of Security of ours will be on the lookout, “he said.

The president explained that at the moment there is a struggle between cartels, so there are already joint operations between the two states to prevent more disappearances.

“What’s going on there? As you know, it is an issue of struggle between cartels over the issue of whether or not people who are dedicated to this issue are going, so there are already joint operations of Tamaulipas, the Federation and us in this part,” he said.

As for the discrepancy in the number of people rescued that has occurred on the Monterrey-Nuevo Laredo highway, he apologized and justified himself by saying that it is the Prosecutor General’s Office that provided him with the information.

“Yesterday I made a mistake, today I ask for an apology: the precise data, the number, is available to the Prosecutor General’s Office. It is not the Government that is responsible for conducting the investigations, nor is it the Secretariat of Public Security, it is the Prosecutor’s Office, and it is the prosecutor who has the precise data and who transmits it to the security tables.