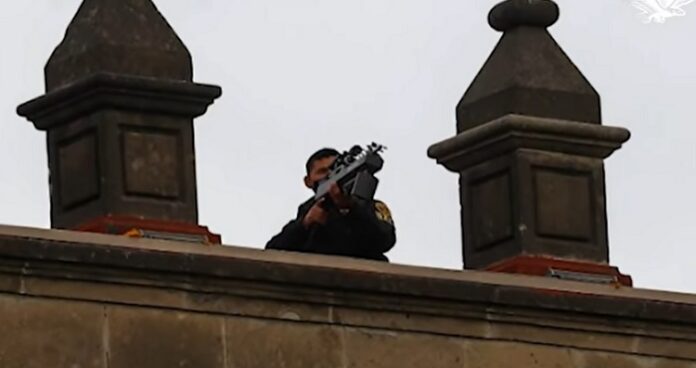 The answer is no, members of the National Guard were handling a portable anti-drone equipment HIKVISION model Uav Jammer.

Through photographs and videos that circulate on Twitter, you can see some people on the roof of the historic site, during the demonstrations for International Women’s Day.

The recordings were released during the afternoon of this Monday and, although there is no certainty that the people were armed, some users indicated that they were snipers.

In this regard, Jesús Ramírez Cuevas, general coordinator of Social Communication of the Presidency of the Republic, said that it is a Hikvision-type drone inhibitor to avoid flights over the Palace.

The government of the President of Mexico, Andrés Manuel López Obrador, through the Secretariat of National Defense (Sedena), spent 3.7 million pesos on four portable anti-drone equipment of the HIKVISION brand model Uav Jammer.

The devices acquired in September of last year by the Sedena are those that the federal government has used this March 8 to protect the National Palace during the women’s demonstration on the occasion of International Women’s Day.