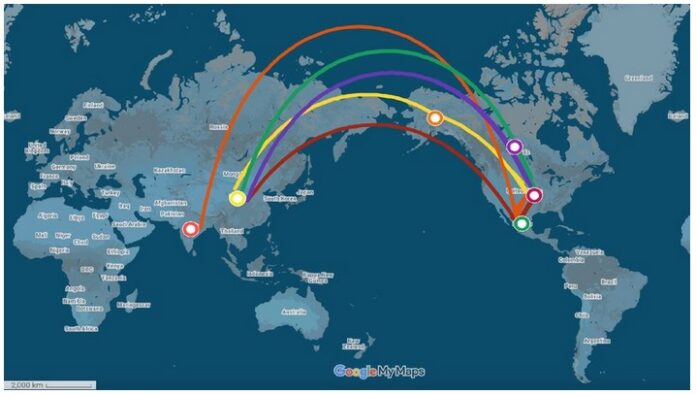 “The opioid epidemic” is linked to the growing number of overdose deaths in the US. Meanwhile, Mexican drug cartels find fentanyl the perfect business to increase their profits and reduce the risks associated with traditional hard drugs.

It was the last day of 2020. Faced with the growing increase in deaths of Americans due to the consumption of fentanyl that Mexican drug cartels traffic from the common border, the Government of Andrés Manuel López Obrador recognized that there is also a crisis in the Aztec country for this opioid that comes from China.

It seemed like one of the traditional morning conferences that the Mexican president leads every day, but on December 31, Defense Minister Luis Crescencio Sandoval admitted that the demand for opioids “is increasing . “

But he also recognized that “all the raw material used to make these drugs arrives through the ports, through Mexican customs.”

The fentanyl reaches the Mexican ports of Manzanillo, Colima and Lazaro Cardenas, Michoacan, from China, and although in 2020 compared to 2019 seizure of this drug in Mexico increased by almost 500%, organized crime and found a way to circumvent surveillance in Aztec customs thanks to the elaboration of different types of labels that facilitate their international shipping, according to an investigation by the organization Insight Crime.

Gerardo Rodríguez Sánchez Lara , coordinator of the Department of International Relations and Political Science of the University of the Americas in Puebla (UDLSP), one of the main private institutions in the country, considered that in the face of this crisis that since 2017 has lit red lights in the US, China should ensure that shipments leaving its territory avoid trafficking in chemical precursors.

He considered that this is a scenario in which the Aztec government must find a way to start a dialogue with China to seek greater controls, and said: “It seems difficult because China does not know whether or not it wants to cooperate in this regard, because in the end He sees it as an agenda that the United States imposes on Mexico, but China is the great actor ”.

On the other hand, at this moment “it is difficult for Mexico to pressure China because it will not want to adopt measures in terms of security in the supply chain, because it sees it as pressure from the United States,” the academic told Infobae Mexico .

The fight against this illicit substance is focused on the Sinaloa cartels, founded by Joaquín el Chapo Guzmán Loera , and the Jalisco Nueva Generación (CJNG) , but there are already smaller organizations that also fight for their share in the fentanyl market and that can not yet be on the radar of the authorities. 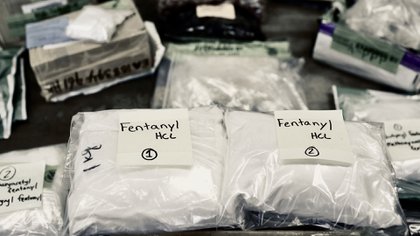 In Mexico, deaths from drug overdoses are rarely recorded correctly, which may not show the proper dimension of the problem in Aztec land (Photo: Reuters)

Criminal groups seeking to consolidate themselves in the illicit market for fentanyl have found a way to enter Mexico in the form of powder, drops on blotting paper, eye drop containers or pills. To multiply its effect, before trafficking it to the United States, they often mix it with cocaine, heroin, MDMA and methamphetamines.

“In China they label them as if they were other things and neither in Mexico nor in China do they have time to do the corresponding research to find out what type of material it is,” Mike Vigil, one of the specialists in hot springs, told Infobae Mexico. most important drug trafficking in America.

Another health-related crisis, that of COVID-19, has been the reason why Mexico created a nexus with China and is the fact that the CanSino Biologicals company has not only carried out thousands of tests on volunteers from phase 3 of its vaccine against the virus in Aztecs land, but also the Chinese pharmaceutical company Sinovac will supply the country with more than 10 million doses to advance the immunization of older adults.

Just last Saturday the first 200,000 doses of Sinovac’s CoronaVac vaccine arrived in the country, while that of CanSino represents one of the main bets of the López Obrador administration as a single application is allegedly required to immunize a person. 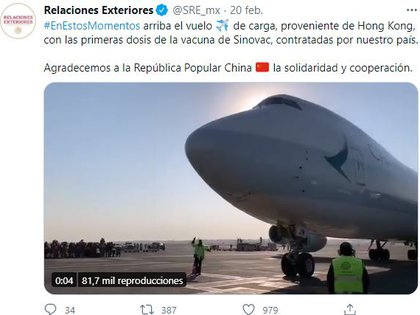 Until now, Mexico is the only country that has two Chinese vaccines (Photo: Twitter / @ SRE_Mx)

The country authorized the application of CoronaVac despite the doubts that its effectiveness has generated in the face of confusing results after the trials carried out in Indonesia and Turkey, since while the first attributed an effectiveness of 65%, the second assured that the it was 91.2 percent.

Until now, Mexico is the only country that has two Chinese vaccines, which for analysts is a sufficient guarantee that at this time the AMLO government does not enter into any type of conflict with Beijing.

“Mexico is in a complicated situation because the CanSino vaccine is one of the great options to complete the vaccination. Love with love is paid and Mexico is indebted to China on this issue ”, Sánchez Lara warned.

The reform in the ports

The Defense Minister’s report released on December 31, 2020, indicated that an estimated 1.3 tons of fentanyl had been seized that year , compared to 222 kilograms in 2019 . The seizure figures can be an indicator of the extent to which the importation has also increased, which in some cases may legally occur by pharmaceutical companies that use the active ingredient as an input for the manufacture of medicines.

In the last section of last year, Mexico began a transition in which control of the port system will pass from the Ministry of Communications and Transport (SCT) to the Ministry of the Navy (Semar). With these reforms, the Navy will assume full management of concessions, contracts, works, permits, rates, and naval education. 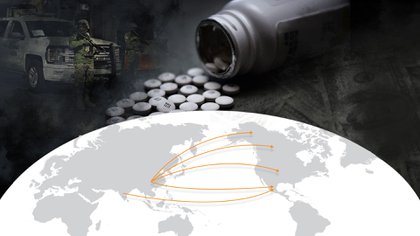 It is expected that the militarization of control in the country’s seas and ports of entry will help reduce the flow of precursor chemicals that are used to produce synthetic drugs, however, this intention has created controversy in the chambers of deputies and senators, who claim the large number of tasks that the executive is delegating to the military.

With little hope that the Mexican executive will take action on the matter, experts wonder if it is not time for the legislative power to act seriously in the creation of comprehensive legislation that fully attacks this problem that generates a very serious health crisis and it causes tens of thousands of deaths that could be prevented by stopping this illicit activity.

In the fentanyl crisis, the US knows that the rate of overdose deaths in its territory increased between 2007 and 2017 from 36,010 to 70,237, but in Mexico, deaths from drug overdoses are rarely recorded correctly, which may not give the adequate dimension of the problem in Aztec land (Tomorrow part three) .