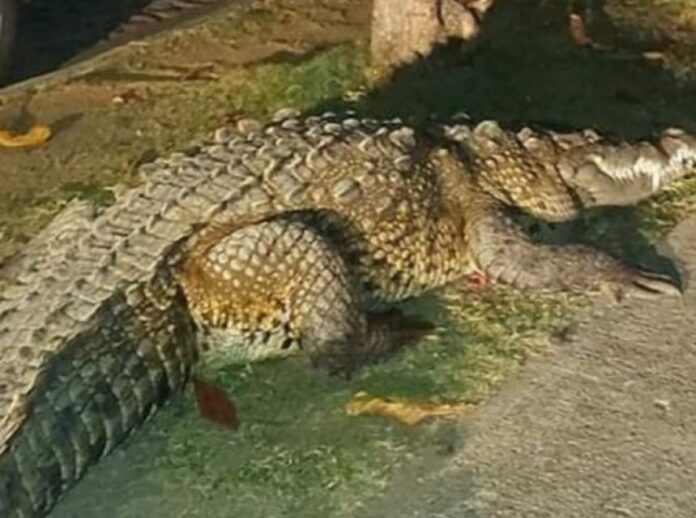 A 3-meter crocodile was photographed walking along the sidewalk on Calle de La Marina. The facts took place on Thursday, February 11th, 2021.

A giant crocodile was creeping across the sidewalks of Marina Vallarta this Thursday night when it was photographed by residents of the area, who fled scared and immediately reported the presence of the reptile to the Police.

The Sauro came out of a lagoon located in the middle of one of the golf courses and was moving along the sidewalk in the residential area of Marina Vallarta, right next to a street with pedestrian and motorist activity.

When the Civil Protection agents arrived, they realized that the crocodile was already duly registered and marked with its label, so it was easy to identify and return to its natural habitat, which is actually the area known as El Salado estuary, not far from the Marina docks.

The animal did not harm anybody, people were only scared, however, authorities recommend staying away at a distance of no less than 8 meters from a crocodile in case of sight and reporting it to the 911 Emergency Number at once, so the specimen can be moved to a safe environment in its natural habitat.

Vaccination begins in Puerto Vallarta; over 20 thousand will receive vaccine

After the controversy, they cancel the project of maxiletras of Puerto Vallarta mirror effect