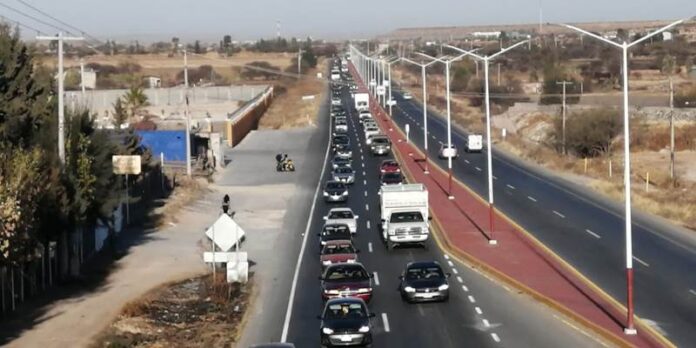 The demands are that infections have increased and some miners have died. The handling of the pandemic has also been questioned by the people who work in the mining industry.

In a caravan of at least 3,000 vehicles, members of the National Mining Metallurgical Union FRENTE, held a demonstration from the municipality of Fresnillo to the capital of Zacatecas to demand from the Mexican Institute of Social Security, the purchase of vaccines against Covid-19 for the people of the mining sector.

The caravan, led by union leader Carlos Pavón Campos, arrived around 12:00 hours at the IMSS Zacatecas delegation offices, where it expressed its disagreement with the institution’s handling of the pandemic despite the payment of fees made by the productive sector.

“The lives of Mexicans should not be TAKING LIGHTLY, the attention that is required must be given, the workers who belong to social security demand TO BE vaccinATED, aLONG WITH ALL beneficiaries, we do not have to be inside of federal policy if we have AN institution that is the one that should take care of our health ”, he said.

During the rally, the union leader said that around 80 miners have been infected with this new coronavirus, and “some” have died (they did not provide an exact number), for this reason, he pointed out that it is necessary for the IMSS to buy vaccines to immunize members.

He added that the federal government has used the vaccine in an “electorate” way by dosing them “one vaccine here, another here is a mockery for the 126 million Mexicans, as only 600 thousand have been vaccinated so far,” he said.

A few minutes after the meeting began, Carlos Pavón Campos was attended by Víctor Martínez de la Rosa , head of legal services, as well as Soraida Zorrillas Fernández , coordinator of attention and orientation to the beneficiary, who invited him to enter the building.

Minutes later, the leader announced the agreements to the media who reported that the IMSS delegate, Sandra Duran Vázquez, promised to follow up and address the deficiencies that they manifested in the system, in addition to making known their demand for the application of the vaccine to federal authorities.