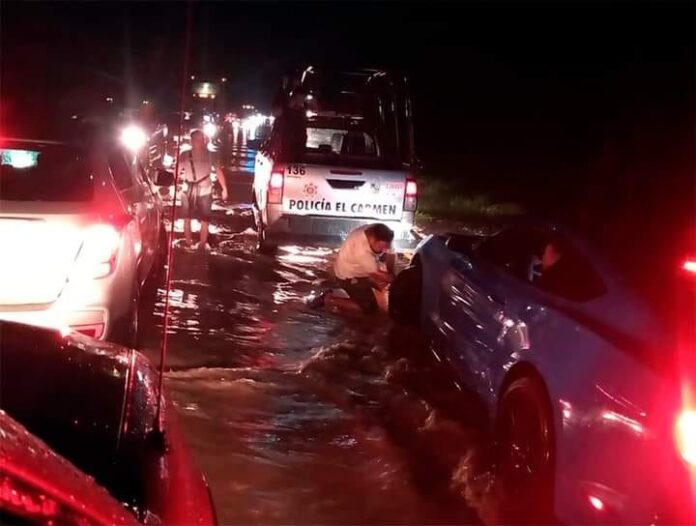 Monclova #Coahuila Rivers of water run through the roads that converge with Monclova. Users of social networks warn about the growth in the Monterrey-Monclova because at the height of “La Huesera” a river practically prevents the circulation of vehicles.

Elements of the Municipal Police and the National Guard are in place supporting motorists.

The forecasts were fulfilled and the rain reached the streets of the metropolitan area causing flooding in various areas.

On the afternoon of this Sunday, September 4, the panorama for Nuevo León changed , this, after the rain forecast was fulfilled and the streets gradually turned into rivers.

Similarly, rivers such as La Silla and Santa Catarina, Potrero Chico in Hidalgo, streams of Santiago and Las Mojarras, in Cerralvo , shone with abundant water after the rains that reached the metropolitan area of ​​Monterrey, as well as its streets and avenues. .

Civil Protection of Nuevo León reported tours carried out by the rains in the metropolitan area, Citrícola and the South of the State.

The agency reported that a unit responded to the report of a man, wearing blue shorts and a black t-shirt, who allegedly fell into the stream in the Monaco and Los Pinos area in the Los Angeles neighborhood, third sector, in the municipality of San Nicolás.

Videos published on social networks establish the rivers and streams that carry abundant water since this Sunday afternoon.

Civil Protection reported that units were deployed to tours of different areas at risk of flooding and puddles in the state.

At the moment there are heavy rains in the municipalities of Santiago on the National Highway, Guadalupe and San Nicolás.

In addition, it is visualized on the radar that there are heavy precipitations for the citrus and metropolitan area now and in the next few hours.

For now, a tour of the La Boca dam was carried out reporting light rain, without news, also flooding in some points without risk at the moment for the population.

These are the flooded avenues in NL

The Secretary of Citizen Security of the municipality of Escobedo reported on the avenues that presented flooding and slow traffic after the heavy rains:

On the side of the municipality of Guadalupe, the municipal government reported that Benito Juárez Avenue in front of Kalos Park, in the Santa Cruz neighborhood, presented flooding in its circulation from east to west.

In addition, on the same avenue and Enredadera, at the height of the Álvaro Obregón high school, in the Tres Caminos neighborhood, this problem also arose, in its lane from east to west.

It transpired that the passage was closed on Benito Juárez and Israel Cavazos avenues, in addition to Eloy Cavazos and Monterrey avenues, so traffic is being diverted to the north.

Through social networks, flooding was also reported due to the fact that the sewers began to overflow due to the flow of water, on Las Puentes Avenue, located in the municipality of Apodaca.

For its part, the Monterrey government has only reported the closure of the following avenues: