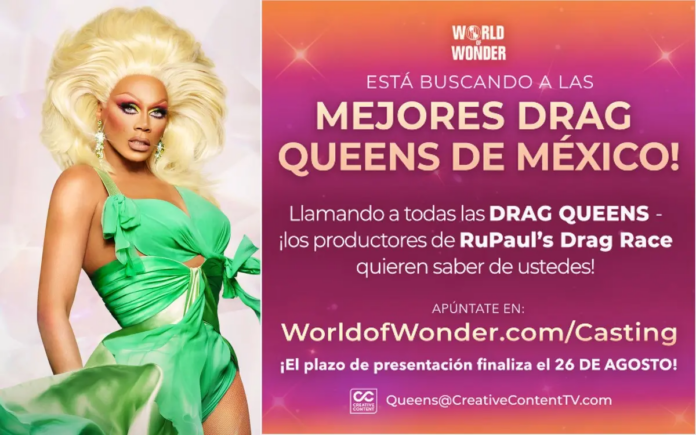 World of Wonder, producer of the reality show, announced the start of the casting through its Instagram account.

The universe of RuPaul’s Drag Race will arrive in Mexico.

World of Wonder, the producer of the successful reality show, announced the start of the casting to recruit the drag queens for its first broadcast in Mexico.

Through its Instagram account, the producer announced the call for the new franchises of the program. Along with Mexico, Germany and Brazil will join.

This will be the second franchise in Spanish of the popular program, after Drag Race Spain was launched in 2021, which already has two seasons and even featured a Mexican judge, singer Gloria Trevi.

Drag Race currently has 14 seasons of its original broadcast; however, the success of the program has been such that it has given rise to different franchises in the United Kingdom, Holland, France, Ital, the countries that make up Oceania, as well as different contest formats such as All Stars. In total there are 35 issues.

On the show, the drag queens have to face makeup challenges, create their own costumes, dance, act, do comedy routines and whatever else comes to mind for the production, in order to show that they possess the charisma, uniqueness, courage and talent enough to be crowned America’s newest drag superstar.

The broadcast has so far 24 Emmys, the awards for television in the United States, including Best Reality and Best Host for RuPaul, the creator of the program.

The Latin presence has always been important among the reality show contestants and one of its contestants is Valentina, of Mexican origin.

In the United States, the impact of the program has been such that politicians have appeared on the program, and topics such as police brutality against the black population, homophobic crimes, mass shootings, or the inclusion of trans people have been touched upon.

How judges have been invited Nancy Pelosi, Lady Gaga, Cameron Diaz, Naomi Campbell, the band Blondie and a long list of artists.

The popularity of the program in Mexico has been so great that national production companies have created their own versions to promote the talent of Mexican drag queens: a live contest called La Carrera Draga, which was held at the Garibaldi Theater, and La Más Draga, a program that is broadcast on YouTube and that already has four seasons.

Although until now there is no date for the start of the broadcast, the casting registration will close on August 26.

But remember: start your engines, and may the best Drag Queen win!

Tesla plans to open a new plant in Mexico City

Safest Places to Visit in Mexico for 2023