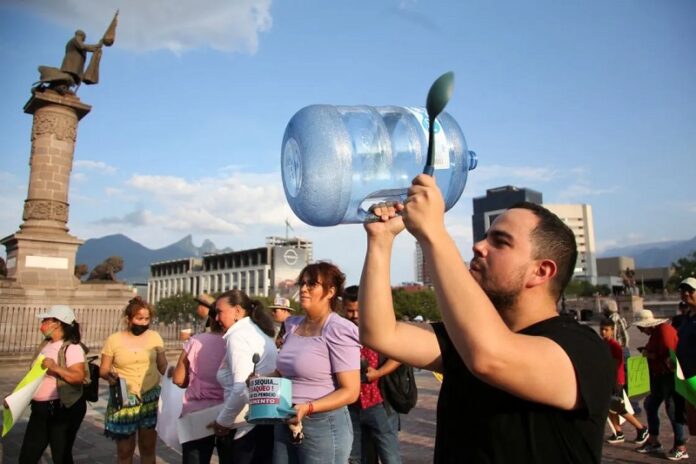 Three months pregnant and queasy with morning sickness, Yasmin Acosta Ruiz pushed a cart laden with buckets of water through the scorching July heat. As she and her 7-year-old son eased the cart over a speed bump, water sloshed onto the pavement. They both winced.

Here on the outskirts of Monterrey, a sprawling industrial city that has become the face of Mexico’s water crisis, every drop counts.

Drought has drained the three reservoirs that provide about 60% of the water for the region’s 5 million residents. Most homes now receive water for only a few hours each morning. And on the city’s periphery, many taps have run dry.

Over the last two weeks, water had flowed in Acosta’s home just once, for several hours. The rest of the time — to flush the toilet, launder clothing, wash dishes or bathe — Acosta had to haul water by hand from a well in a park half a mile away. It was not potable, so she had to buy bottled water to cook with.

“It’s like we’ve gone back in time,” she said, wiping sweat from her forehead as she finished her eighth trip to the well that day. “And tomorrow I’ll have to do it all over again.”

The crisis has sparked widespread upheaval, with frustrated residents blocking major highways in protest and people in other parts of the state setting fire to pipes that were supposed to divert emergency flows to the city.

Many are angry at government officials and also the region’s mega-factories, which have largely continued work as usual thanks to federal concessions that allow them to suck water from the strained aquifer via private wells.

Experts say the crisis unfolding here is a stark warning for the rest of Mexico — as well as the American West.

“It should be a wake-up call,” said Samuel Sandoval Solis, an expert in water management at UC Davis who described the situation in Monterrey as a “crystal ball” for Southern California.

Both are densely packed metropolitan centers that rely heavily on faraway water sources.