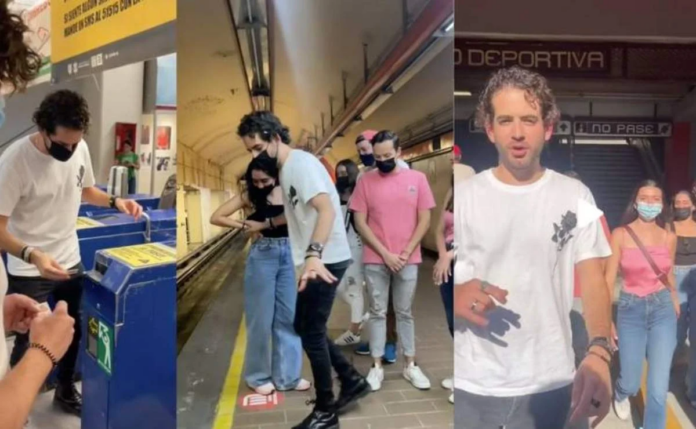 Young people identified as “whitexicans” became a trend on TikTok for riding the CDMX subway. The clip already has 2 million views

Traveling on the Mexico City Metro Collective Transportation System is a very common activity for many residents of the capital, who already know the stations, transfers and lines almost by heart like the back of their hand.

This is easy to understand if one considers that the metro is the most used means of transport by residents of the capital, according to the National Institute of Statistics and Geography ( INEGI ) to travel to their work or study centers.

However, apparently, not all the inhabitants of CDMX have used this popular means of transport, since a group of young people became a trend on TikTok, after a video was published in which they explore this service for the first time.

. In the video entitled “Classes for whitexicans, Part 2: The subway “, the influencer gives a class to a group of young people so that they learn how to move on the subway.

“How are you my whitexican friends,  how are you? Welcome to the subway of Mexico City. Applause please, “says Guizar. During the video, the tiktoker teaches young people how to insert their ticket at the turnstiles to enter the subway, to transfer at the stations.

In addition, he usually makes references to actions that these types of young people experience in their day-to-day so that they feel familiar with what they are experiencing in the subway–

“These are like the ones in the mall, they are escalators, you already know that. There are people who prefer to walk down the stairs, see that whitexican over there, he wanted to live the full experience.

Likewise, he points out that the subway will arrive at the platform at a great speed as big brand cars would. “The subway is going to approach at very fast speeds as if they were in a Lambo or a Ferrari. The moment the doors open, they rush in, get your batteries up, we need speed, this is like New York”.

In one shot of the video, a girl is seen complaining about the delay of the subway“With a driver we would have already arrived”, to which Guizar replies “No, no. But it is the experience, not so much the speed”. Later, after transferring from station to station, they arrive at their destination in the Foro Sol.

In the comments, the achievement of the young people has been praised because, due to their possible privileged position, it was very difficult for them to manage to explore the subway to reach their destination.

“A blow of humility”, “I can’t with the intensity of the adventure… they are my idols”, and “I need this! When is the next face-to-face course?”, Are some comments that are read in the publication.

It should be noted that the term “ whitexican ” has become a trend in recent years, especially on the internet.

According to some Internet users, this word is used in a pejorative way to refer to Mexicans who usually have social and economic advantages, and who consider that everyone in Mexico has the same opportunities.