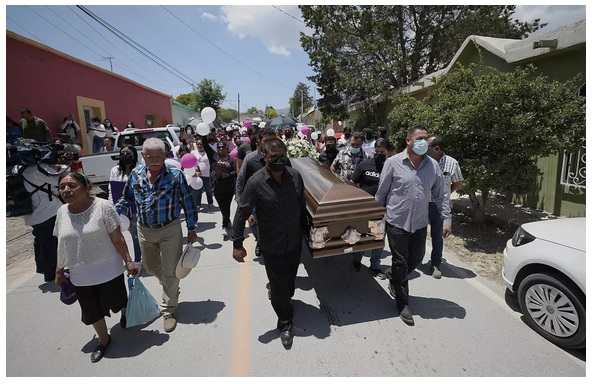 Standing atop a windswept hill in northern Mexico, surrounded by dozens of fellow mourners, Mario Escobar prepared to bury his teenage daughter, Debanhi, one of the latest victims of the country’s crisis of violence against women.

“We are destroyed inside,” he said. “We had so much faith that we would find her alive, but that’s not what happened.”

The nearly two-week search for the 18-year-old law student who disappeared on April 9 near the northern industrial city of Monterrey has sparked new anguish and outrage over gender violence.

In Mexico, an average of 10 women a day are killed, and tens of thousands more are missing.

More than one hundred family members, friends, and neighbors joined the funeral in Galeana, Nuevo Leon, the hometown of Debanhi’s mother where the family often spent weekends and holidays.

Singing hymns as they walked under the hot sun, the mourners carried white balloons and hand-written signs demanding justice for Debanhi.

The teenager’s body was found on Thursday night submerged in a cistern inside the grounds of a motel near where she was last seen alive.

The state attorney general said on Friday that the cause of death was a contusion to the skull and that all lines of investigation were open. At the funeral, Mario Escobar said his daughter’s corpse had been “beaten and strangled.”

Her death came amid a spate of disappearances of women in the state of Nuevo Leon. Since the beginning of this year, at least 26 women and girls have disappeared, and six more – including Debanhi – have been found dead after being reported missing.