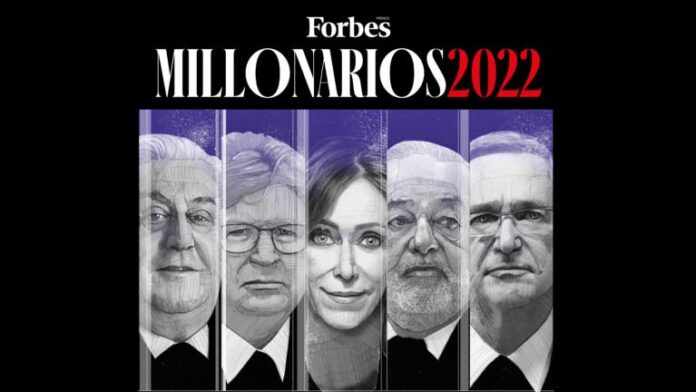 In the midst of economic uncertainty, the bulk of the main Mexican companies reported faster growth than that of the country’s economy, but not everything is clear for the national billionaires.

Two years have passed since the Covid-19 pandemic appeared in the world. Most of the Billionaires’ fortunes faced economic uncertainty and crashes in their finances. Today, businessmen and women are experiencing the reactivation of the markets and want to write a new page.

Mexican businessmen also show new energy, despite the fact that the economy smiles at them only discreetly. This “2021 was the year of recovery… [Although] it is a reality that the Mexican economy did not recover what was expected at the beginning of last year,” says Jacobo Rodríguez, director of Financial Analysis at the advisory firm Black WallStreet Capital .

The growth of the Mexican economy was around 5% in 2021, an insufficient percentage to compensate for the 8% drop in the first year of the pandemic.

Although it is true that last year was better for some industries that were previously paralyzed, such as tourism and restaurants, in Mexico the economic recovery was moderate and the damage caused by the pandemic to productive activity, especially the disruption in supply chains, are still in force.

In addition, the growth of inflation levels outside the goals of the central banks is no longer considered a “temporary problem”, as was initially expected, and, now, it is intended to be controlled with more restrictive monetary policies.

That the wealth of the highest-profile Mexicans did not decrease at the end of 2020 does not speak of infallibility in the face of crises, but of the expectations of 2021 that, finally, were not as generous as it was glimpsed at the beginning. However, contrary to what might be expected from the behavior of the stock markets in the face of severe and large-scale crises, the select group of Mexican billionaires once again increased their wealth as a whole.

Of the 38 businessmen selected by Forbes for the list of millionaires, with at least 500 million dollars (USD) of fortune in 2022, half (19) increased their wealth at a double-digit rate, including personalities from such varied sectors like real estate, with the Losada family; the petrochemical and materials, by Antonio del Valle Ruiz; the Barragán and Grossman families, who are mainly involved in the beverage sector; or, the self-services, of the Chedraui Obeso.

The rest maintained and even increased their wealth and only two, Alfredo Harp and the Baillères family, reduced their assets.

The appearance of the SARSCov-2 coronavirus changed the habits of billions of people who, in the beginning, calculated that the use of masks, remote office work, and other care would only last a few weeks.

The truth is that the challenge lasted (and, at times, intensified) until the world’s scientists developed vaccines in record time and the immunization campaigns of all countries in 2021 allowed the global economy to gradually withstand better circumstances the latest waves of infections.

The year 2021 started with a hopeful feeling against expectations, thanks to vaccination. However, waves of Covid-19 continue to occur. In addition, international trade suffered from China’s strict control in the face of outbreaks that slowed down trade, forcing analysts to make adjustments and cut their expectations, until closing at levels of productive activity similar to those of 2016.

In the midst of this uncertainty, the bulk of the main Mexican companies reported faster growth than that of the country’s economy, recalled Rodríguez, of Black Wall Street Capital.

Among the companies whose income grew the most, even in double digits, stands out the restaurant giant Alsea, from the Torrado family, one of the public companies that were most affected by social distance in 2020; Grupo Bimbo, the largest bakery in the world, belonging to families such as the Servitje Montul and Jorba Servitje; Grupo Televisa, Emilio Azcárraga’s telecommunications company; and Grupo Carso, the industrial and commercial conglomerate of Carlos Slim, the wealthiest Mexican, to name a few.

The shares of these issuers had a performance that exceeded the return of 19% of the main index of the Mexican Stock Exchange, the S&P/BMV IPC, which demonstrates the correlation between the performance of companies with fortunes, since Azcárraga, Slim, the Servitje and the Torrados are among the 19 that report an increase in equity of at least 10%.

One of the strengths of these firms is precisely that they do not depend only on what is happening in Mexico or the performance of its economy. In addition to Alsea and Bimbo, there are other international giants, such as the corn flour marketer Gruma, owned by the González Moreno family, or América Móvil, the jewel in Carlos Slim’s crown.

Other entrepreneurs who have taken their businesses beyond Mexico in recent years are Antonio del Valle (with his commitment to companies from Asian nations), the Chedraui family (with the expansion, in the southeastern United States, of the supermarket business ), and even Pablo Legorreta, the last name to break into the list, as he bases the administration of drug licenses for his company Royalty Pharma in the United States.

Carlos Hermosillo, a specialist in Mexican issuers, considers that another fundamental point that maintained the value of the companies of the billionaires lies in the strategy and discipline implemented by the management teams, which allowed the firms to face a prolonged crisis while maintaining healthy finances.

“It helps a lot that [the financial crisis] caught [the broadcasters] in a really strong financial position; in general, few cases of compromised balances, but, in the aggregate, the financial base was solid”, says, in an interview, the former Director of Analysis in various brokerage houses.

The Covid-19 pandemic is preceded by an environment that already suggested a slowdown and times of “lean cows”, which was recorded in the economic performance of the end of 2018 and, above all, with the annual decline of 2019, the first year of President Andrés Manuel López Obrador, considered (in some circles) as not very interested in generating an appropriate climate for investments and, at times, even hostile to private initiative.

Faced with this scenario and, finally, with the outbreak of the virus, the businesses of the entrepreneurs undertook cost-saving and investment containment strategies, in addition to operating efficiencies that, once the worst moment of the crisis had passed, have brought extraordinary benefits of facing the beginning of recovery.

“In general terms, the administrations of many Mexican companies, the truth is that they have done a very good job,” adds Rodríguez, of Black Wall Street Capital.

However, both Rodríguez and Hermosillo point out that the fortunes linked to the main companies on the stock market could be greater because they have the potential to unlock value.

The Mexican market, where most of the main companies of local tycoons are listed, in addition to spending decades with a small size compared to the economy, today is undervalued.

The most recent highs of the reference indices are barely 8% higher than those of 2017, a growth that does not correspond to the income and operating flow reported by the issuers in the last five years, which is reflected in the multiples, but, above all, everything, in the wave of recent delistings.

The value of the companies of Mexican billionaires could take off, according to experts, as long as the incentives for investment and the fear of change of rules in Mexico disappear, the economic outlook improves and the great current fears, such as monetary policy or the European war, limit its negative effects.

“There are still many issues that create uncertainty and nervousness among investors, questions about the rule of law in Mexico, and other issues,” adds Hermosillo.

When the disputed mandate revocation consultation ends, the left-wing president will focus on constitutional reforms that are controversial in the eyes of a sector of the population, such as the electrical reform, which is about to be discussed in San Lázaro and which is part of its efforts to retake the energy stewardship through the domain of the state-owned Petróleos Mexicanos and the Federal Electricity Commission (CFE).

Obviously, the challenges do not end on this horizon: inflation seems indomitable as long as supply problems persist, both due to the closure of ports and production centers, mainly in China, or when an outbreak of coronavirus is detected, as well as due to the effects of the war between Ukraine and Russia, which has already completely upset the expectations of the performance of the price of commodities and energy.

Carlos Hermosillo is clear that the biggest challenge weighs on the millionaires of Mexico and their companies. “The companies have done their job, they have had their positive results, they have accommodated their growth strategies and investment plans… but the environment [complex and out of their control] there is no way to get rid of it”.