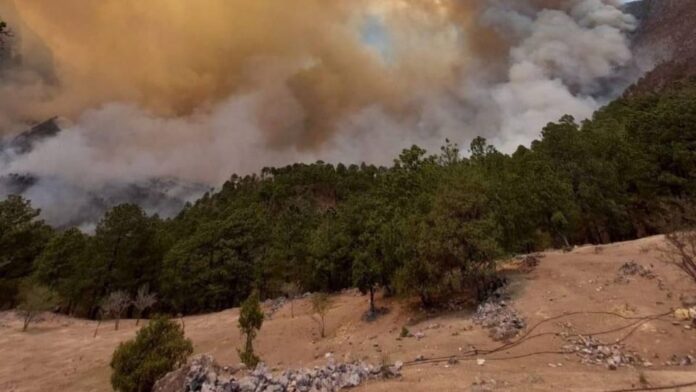 The fire had been controlled, but, with the entry of a cold front and a dry environment, the fire reignited again and combat actions had to be resumed.

The fire in the Sierra de Santiago, Nuevo León, México, has already been affecting the forest in the area for two weeks and has consumed almost 3,000 hectares, according to information from Civil Protection.

The fire was supposed to be under control last Monday, however, the entry of a cold front that generated winds of up to 80 kilometers per hour, coupled with a dry environment, caused the fire to reignite again and combat actions had to be resumed.

State Civil Protection confirmed that no homes or cabins have been damaged in the area, however, the fire is near El Tejocote, so surveillance is maintained in the area.

Around 12 families were preventively evacuated from the Lagunillas, Mesa del Oso, and El Hondable areas, and another 23 people have been evicted with the support of aircraft from Puerto Cebolla to Casillas, in Rayones, due to the presence of smoke.

The strong winds are causing the fire to intensify so the firefighting tasks will be resumed.

Civil Protection confirmed that air maneuvers are being carried out with the support of seven aircraft and the DC 10 Air Tanker, in addition to 380 brigade members on the ground.

The fire began on March 24 in the Sierra de Santiago and has affected almost 3,000 hectares of forest, which is why it is considered one of the most devastating in history, according to municipal authorities.

The Mayor David de la Peña and the population of the Sierra have asked citizens for support to attend the collection centers, with donations for the evacuees and the brigade members fighting the fire. But also to prevent citizens from going to the Sierra, it is a dangerous place right now.