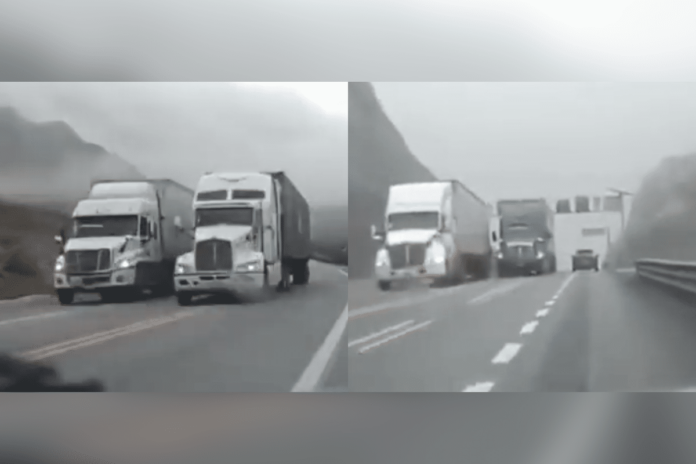 A day of terror that a woman traveling on the Monterrey – Saltillo highway experienced, as she felt in serious danger after seeing how trailers passed another at high speed and in the opposite lane.

While I was co-pilot, I managed to record scared when the semi-trucks invaded the other lane “forcing” the driver to drive on the shoulder.

The video that has been circulating on networks, something else that stands out in said clip is the same woman saying an offensive word, WORDS more than once, because after seeing that the trailers passed one after another, she began to get irritated by the recklessness.

“What’s wrong with them?! Just look, that is, they are overtaking the road and if we don’t go to the shoulder they will hit us, while the driver affirms with a ‘fuck us'”, can be heard while the continuous action.

With a tone of surprise and astonishment for not believing what they are seeing, the couple and especially the woman begin to insult the drivers.

After this video was released on networks, more than the trailers, the one who has been highly criticized is the same woman after more than once offending the trailers with high-sounding words.

“Those roads are designed to be used just like that, the ‘peasant’ who doesn’t know is the lady who is taking the video,” wrote one user.

More users who reacted to the video reiterated that the woman is unaware that the road is one and a half lanes and that there is a sign that says: “Circulate on the shoulder and allow passing.”

However, the regulation indicates that if the line is continuous or there is a double yellow line, it is the same as having a cement separator. In this case, it is totally forbidden to change lanes.

From what is shown in the video, the woman is right to be surprised and angry because they could cause an accident by not obeying traffic rules.

Monterrey-Saltillo Highway one of Mexico most dangerous roads

The Monterrey-Saltillo Highway faces, in addition to adverse natural conditions, such as fog and rain, red lights that put those who travel along this road at greater risk, which registers frequent accidents and catastrophes

According to land route expert Sergio Joel Vargas, this toll road presents dangers, such as narrow shoulders, in addition to having only one emergency ramp and little signage to lead to it.

He also warned that it lacks vigilance and preventive operations when there is fog or drizzle, while another specialist pointed out that the highway lacks enough reflectors on the dividing wall.

Inaugurated on November 9, 2009, 22 pileups have been reported on this 50-kilometer toll road, which is concessioned to Roadis, which charges a toll of 92 pesos, and is guarded by federal agents and the SCT.

Vargas pointed out that the shoulders are 2.50 meters wide, which is the minimum required.

“Where an accident can occur,” he stated, “(the shoulders) should be widened so that the driver gets off safely and they don’t get run over.”

Still, he said, the highway has only one ramp so it can be used by drivers whose vehicles run out of brakes.

During a tour, it was observed that the advertisement that refers to it is located just at the entrance of the road in the Saltillo-Monterrey direction.

Meters before this sign are others that ask drivers to follow the red line if they drive without brakes.

The ramp is located approximately one kilometer from the toll booth, but from its limits with Saltillo to that point there is no sign indicating how far away the emergency exit is.

In the 11 years of operation of the highway, nine mishaps have occurred at the toll booth.

Trailers without brakes that have not been able to enter the safety ramp have impacted modules of the booth.

“The slope from Saltillo to Monterrey is sometimes 3 percent,” Vargas said, “(and) the vehicles go very fast and collide with those that are parked.

“They can’t brake and, if they do, the same load causes them to skid”.

The expert on land routes also pointed out the lack of operations and care when there is fog.

“There is no monitoring by the Federal Police to ensure that vehicles have fog lights, that they reduce speed and increase the signs.”

He added that the authority and the company in charge must implement actions to reduce risks, while drivers must respect the signs and speed limits.

For The Latest Mexico News About Living, Working, Investing, or Retiring in Mexico Please Join and Share our Page Click Here