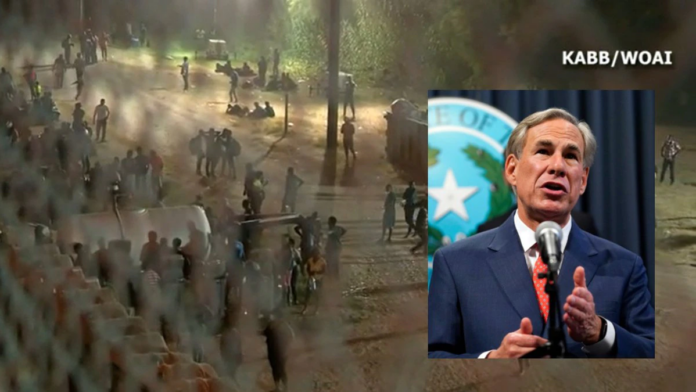 Texas Gov. Greg Abbott announced on Thursday that he is shutting down six points of entry along the U.S.-Mexico border in an effort to stop the flow of illegal immigrants “from overrunning our state.”

“The sheer negligence of the Biden administration to do their job and secure the border is appalling. I have directed the Department of Public Safety and the Texas National Guard to surge personnel and vehicles to shut down six points of entry along the southern border to stop these caravans from overrunning our state,” Gov. Abbott’s office said in a statement to Fox News, according to Fox LA’s Bill Melugin.

“The border crisis is so dire that the U.S. Customs and Border Protection is requesting our help as their border agents are overwhelmed by the chaos,” the statement continued. “Unlike President Biden, the State of Texas remains committed to securing our border and protecting Americans.”

On Thursday evening, Melugin shared a shocking video of the situation in Del Rio, Texas, where thousands of illegal immigrants were waiting under the international bridge to be processed.

“NEW: Source on the ground at the international bridge in Del Rio just sent me this video showing the deteriorating situation,” he tweeted. “Federal source says the number has now increased to 9,300. It was 8,200 this morning, and about 4,000 yesterday AM. Mostly Haitians, I’m told. @FoxNews.”

“BREAKING: Our drone is back over the international bridge in Del Rio, TX,” Melugin wrote on Twitter. “Per source, the number of migrants waiting to be processed has now swelled to approx 8,200. It was 4,000 yesterday AM. Doubled in one day. BP overwhelmed, & I’m told situation is “out of control” @FoxNews.”

According to CNN, Judge Emmet Sullivan of the District of Columbia District Court found that the administration has sufficient mitigation measures to limit the spread of COVID-19 at the border.

“But in view of the wide availability of testing, vaccines, and other minimization measures, the Court is not convinced that the transmission of COVID-19 during border processing cannot be significantly mitigated. Indeed, the government has successfully implemented mitigation measures with regard to processing unaccompanied minors in order to minimize the risk of COVID-19 transmission,” the ruling stated.

The Biden administration has relied heavily on pandemic mitigation as a reason to expel illegal immigrants — an excuse that will no longer be available once the judge’s order goes into effect in two weeks.

More than 200,000 illegal immigrants have been arrested at the United States-Mexico border for the second month in a row in August, a source from the Department of Homeland Security (DHS) said Wednesday.

The outlet reported that there were 208,887 apprehensions in August, a slight drop from the 212,672 encounters in July. Compared to the same period last year, however, the number of encounters drastically increased from just 50,014 in August 2020 – a 317 percent jump, according to U.S. Customs and Border Protection (CBP) statistics.

This year also marked a 233 percent increase over August 2019, when 62,707 illegal immigrants were encountered at the border.