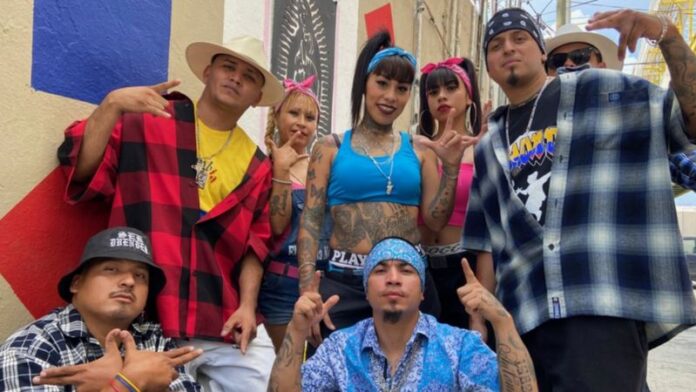 In the middle of the mountains of Monterrey, Mexico, there is a small Colombia, a Kolombia, a Colombia Regia.

It is a place where both countries are connected by partying and dancing, but also by uprooting and nostalgia.

In this city in the north of Mexico, the Colombian cumbia was installed more than 50 years ago, with all its historical, social, and cultural load.

And such is the weight of the cumbia, that even today in neighborhoods like La Independencia or La Campana live the Colombians, the Colombians … or the Cholombians, as some also refer to them.

” The Colombians, that’s how we are baptized here because of the taste for cumbia,” José Gregorio Castillo, a designer who works as a screen printer for Colombian music groups in Monterrey, explains to BBC Mundo.

Colombians like Castillo are just one part of the Cumbiambera culture that is breathed in Monterrey and that today is part of the identity of the city.

In the streets of the downtown, you can see posters that announce presentations of cumbia groups, there are bars dedicated to this type of music, and in some places, collectors and Colombians gather to talk about the history of cumbia and its presence in Monterrey.

In the commercial premises, cumbias and vallenatos sound, their brother musical genre, which is also a fundamental part of Colombian folklore, and there is even a store dedicated to selling typical articles of Colombian culture such as backpacks, hats and souvenirs of the idols of this music in Colombia.

“It’s a small Colombia, “ Gabriel Dueñez, a collector and sonidero, tells BBC Mundo, the name of those who promoted the Cumbiambera culture in the city with their vinyl records.

At BBC Mundo we toured that tiny Colombia that was formed thanks to cumbia.

A continent united by rhythm

The cumbia was born in the north of Colombia, as a mixture of the percussion of African slaves, the bagpipes of the native Indians and the songs of the Spanish settlers.

Today it has spread throughout the continent, from Mexico to Chile and Argentina, and its cadence is a key part of several hits from pop music, hip hop and reggaeton.

Each country has adapted them to their environment, like the cumbias villeras of Argentina; or the Amazonian cumbias of Peru.

But in Monterrey, the connection with Colombia is evident.

In the city there are musical groups that from their name pay tribute to Colombia, the cumbia and the vallenato.

And many of them have adopted the letter K as a distinctive of Cumbia and Colombian sentiment.

The Klan Barranquillero (for Barranquilla, a city in the Colombian Caribbean), Los Kumbiamberos RS, Eskándalo Vallenato …

And perhaps the most famous of them: Celso Piña and his Ronda Bogotá.

Piña died in 2019, but her relatives keep the Ronda Bogotá band alive.

These groups are the inheritors of a tradition that began in the 1960s when the first vinyl cumbia music arrived in Monterrey.

These records came from two sides: from the north and from the south, Toy Selectah explains.

On the one hand, they came from Mexico City, but on the others they came from Texas, in the United States, from where Colombian migrants traveled to Monterrey accompanied by their music.

Upon arriving in Monterrey, “those records never came back,” says the producer. “They were left here in the hands of some character from the Independencia neighborhood.”

The Independencia neighborhood is a popular sector of Monterrey, which was founded largely by migrants and peasants from other parts of Mexico who came to seek new opportunities in a growing city.

“Neither the music of the upper social class nor the traditional music, which in this case was northern music, represented the sentiment of the people who had come to the city,” says Selectah.

“And their hunger and the desire to eat come together,” he says.

“The Colombian music records with that lament, with that peasant longing, with that way of expressing those distances, that desire to feel the land, to remember the origin … It became the choice of the dispossessed, of the newcomers, of those who were not from here, but were made from here “.

Thus, cumbia became the music of people of peasant origin who became urban workers who felt “nostalgia for something that is no longer between the concrete and the rod of the popular colonies “, as described in the Map de la Colombia Regia, a recent publication by the Campo Semántico collective that explores the culture of cumbia in Monterrey.

The Colombia Regia, as this phenomenon of “Colombia chiquita” is known, is a mixture of the country that gave rise to the cumbia and the name of Monterrey, who are called regiomontanos, or simply regios.

And with the cumbia came the Colombians, the Kolombia.

“We take cumbia as a way of life. You are born here in Monterrey and almost the majority listen to pure cumbia, you grow up with cumbia and wherever you go you listen to cumbia,” says Mundo Ángel Gutiérrez, a Colombian who belongs to the group. of Union de Cumbia dance from the Independencia neighborhood.

At first, many Colombians were young people who listened to rock, metal or punk, but when they discovered cumbia they felt identified.

“The Colombians at the beginning could have been like a transmutation of the punks, who in one way or another began to find codes that allowed them to be unique, tough, authentic,” indicates Selectah.

Thus, for decades, they were identified with a mixture of styles that took elements of the Chicano, hip hop, punk and tropical, along with very Mexican religious elements, such as the scapulars or the Virgin of Guadalupe.

That appearance and the fact that they were related to gangs and drug use, began to mark a stigma on many Colombia.

“We were being discriminated against, ” says Gutiérrez.

“Sometimes the police would grab you and cut your hair just because it was a bad image .”

For Ivonne Azpeytia, organizer of the Monterrey Cumbia Fest and who has been investigating this cultural movement, the appearance of the Colombians represented a challenge for Monterrey.

“As a society, it was very difficult for us to understand that expression of young people who felt left out by the music they listened to, by the way they dressed, by the way they spoke,” says Azpeytia in conversation with BBC Mundo.

“Discrimination made us change our clothing, and more than anything you change little by little over the years. At the time it was a fashion, but now we carry that fashion inside “, says Ángel Guitérrez.

The cumbia that arrived in Monterrey had an unexpected turn, from which its distinctive seal was born.

In the long nights of cumbia dance in Independencia, the sonideros put their records one after the other, non-stop.

Thus, on one of those nights, after seven hours playing music, the sound player Gabriel Dueñez began to fail his sound equipment, and the songs began to sound slower, with which the cadence was extended and an almost hypnotic rhythm was created. .

The dancers liked that are almost ps i codélico and since then the parties could not miss the cumbias that sounded minor revolution on the turntable.

The cumbia lowered was born.

“I think that when hearing the slower rhythm, the Colombians, the race, take on more flavor, they feel more inspired,” says Dueñez.

The style of the Colombians and their taste for lowered cumbia was reflected in the film “I’m not here anymore”, directed by Fernando Frías de la Parra and which premiered on Netflix in 2019.

“There are Colombians who have come here and are surprised by what is happening in Monterrey,” Ángel Arauza, a young cumbia singer, tells BBC Mundo.

Arauza began singing in buses and restaurants and this year he released an album of cumbiamberos hits.

How he, other young people and veterans continue to keep the spirit of cumbia alive in the city.

“There are minstrels from Colombia who did not give them their place in their country and here they love them, love them, respect them and are idols, ” Mario Durán, the owner of a store in the center of Monterrey, tells BBC Mundo. It sells all kinds of items related to Colombian folklore, from key rings and wallets to hats and posters of legendary groups like El Binomio de Oro.

“I am a Mexican- Colombian, ” says Durán with a laugh, while wearing a shirt of the Colombian soccer team and a mask with the tricolor yellow, blue and red.

Cumbia fans come to his store to buy hats and backpacks, or simply to talk about the music that unites them.

In the La Independencia neighborhood, “the mere kills of the cumbia in Monterrey”, as Ángel Guitiérrez calls it, it is common to see graffiti and murals with the colors of the Colombian flag.

In the basement of the Puente del Papa that connects with that neighborhood, the cumbiamberos gather to listen to their music and exchange records, while proudly wearing the Colombian flag and the Vueltiaos hats, typical of the Colombian Caribbean.

“Outside of Colombia, Monterrey is the second home of cumbia,” says Ivonne Azpeytia.

“Monterrey is going to continue promoting cumbia until the end of history.”

Querétaro, among the five states with the best levels of social progress