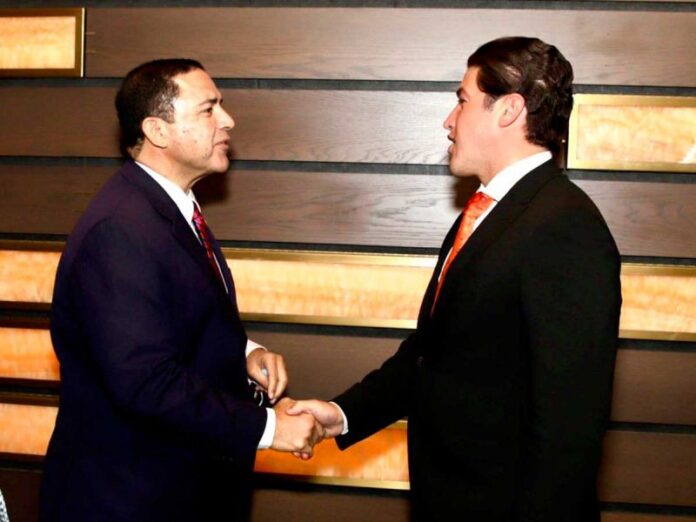 US Representative Henry Cuellar held a press conference along with Nuevo Leon’s Governor-Elect Samuel Garcia to discuss plans to increase commerce and tourism.

Enrique Roberto “Henry” Cuellar is an American politician serving as the U.S. Representative for Texas’s 28th congressional district since 2005. He is a member of the Democratic Party and a self-described moderate-centrist. His district extends from the Rio Grande to San Antonio’s suburbs.

Garcia explained that the 15 kilometer border that Nuevo Leon (NL) shares with Texas, and the Puente International Colombia has not been used to its full potential in the past 25 years.

Cuellar and Garcia spoke on recent violent attacks that have happened in Tamaulipas, the neighboring state to N.L. Garcia assured that Nuevo Leon is protected and that state travel is safe.

They explained two main ideas that would help increase commerce and tourism between the Texas and nuevo Leon: Gloria-Colombia highway and a train that would travel from San Antonio, Texas to Monterrey, N.L.

To arrive to the International Bridge between Texas and N.L., travelers must cross Mexican state lines into Tamaulipas, then cross back into Nuevo Leon to cross the border into Laredo. The idea for the Gloria-Colombia Highway is that travelers could go from Monterrey to Laredo without leaving state lines.

Garcia announced the Gloria-Colombia Highway last week during his visit to Laredo.

Representative Cuellar, who has been vocal about removing the non-essential land travel restrictions between U.S.-Mexico, explained that the ban has negatively affected both sides of the border.

“Before the pandemic hit there were over 18 million Mexicans that would come into the U.S. to spend over 19 billion dollars. So we certainly wanna lift that [restriction],” Cuellar said.

Cuellar also explained what he called the “China Bill,” known as H.R.3593 – Department of Energy Science for the Future Act in which the U.S. will look to increase U.S. industry in order to not depend on other countries, such as China.

“Under the pandemic we learned that the chain supply with China put us at a disadvantage, so i actually have an amendment that would strengthen the chain supply between Mexico and the United States. And the largest industrial area is Monterrey,” Cuellar said. “I think we prefer Mexico over China.”

Garcia also spoke about some conversations he had with California representatives, regarding environmental actions that could help decrease air pollution in Monterrey. The governor-elect explained that along with Monterrey’s economic development, air pollution has also increased.