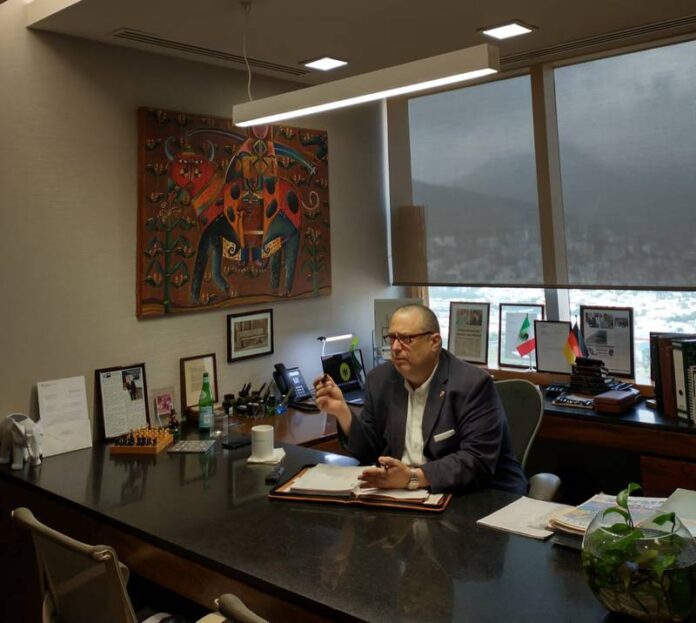 “Placing Nuevo León (NL) as the industrial cradle of Mexico, sharing its know-how, technology, research, innovation, and knowledge in dual education, is one of the objectives in which the German industry seeks to contribute”, said Fritz Eisele Thurau, Honorary Consul of Germany in Nuevo León.

“For this, it is necessary to work more closely with the different levels of government and agencies in charge of attracting investment, so that there is no misperception that they are seeking to compete and not help. One of the areas of opportunity that exists bilaterally, is the agri-food sector, mobility and sustainability,” said Eisele.

He added that “if we put the batteries together and all the institutions work as a team, and to the extent that the institutions here in the state understand that we come not to compete but to help and get more involved, we will be able to help them more.”

He explained that with the disappearance of Promexico, as a promoter of trade and investment, numerous channels were opened that had to make individual efforts, however, he considered the results could be much better if these efforts are combined.

“What we are looking for is to reconnect again, much more than we have been connected with them because at the end of the day it is of mutual interest, there is no internal competition here” Eisele continued.

“The German country cannot but be pleased to help the government of Nuevo León and invest Monterrey to generate direct foreign investment, it is our reason for being as well, that is why we seek to get much more involved,” the Honorary Consul of Germany stated.

The also representative director of the Mexican-German Chamber of Commerce and Industry (Camexa) mentioned that the body not only seeks the presence of German companies in the north of Mexico, and in particular in Monterrey, but also to position Nuevo León firms in Germany.

He considered that the state authorities have done a good job in attracting foreign investment, “however, much of it has been Asian, which is respectable and understandable, but you have to diversify the portfolio.”

“You have to understand that the investment does not always necessarily have to be in money or factories, sometimes the know-how or the technology is much more valuable than the production plant itself because that is what makes it possible to manufacture the products.”

Another example, in which they collaborate is through the Chamber of the Transformation Industry (Caintra) of NL through dual education.

This allows graduates of technical careers or people who practice a trade such as masonry, electrician, among others, to learn technology and business management, “with which they could become CEOs of manufacturing and technology companies.”

“Dual education will give the possibility, to those who go to companies to learn from iron, to learn about management and people management.”

On the other hand, he mentioned that the economic reopening that has taken place in the country, the management of the vaccination process that has occurred to date, give rise to German companies to start talks again to carry out their investment projects in Mexico.

“That is something that we have to transmit to all countries and, it is not by chance that much of that investment can be given in Monterrey,” Fritz Eisele Thurau, Honorary Consul of Germany in Nuevo León concluded.