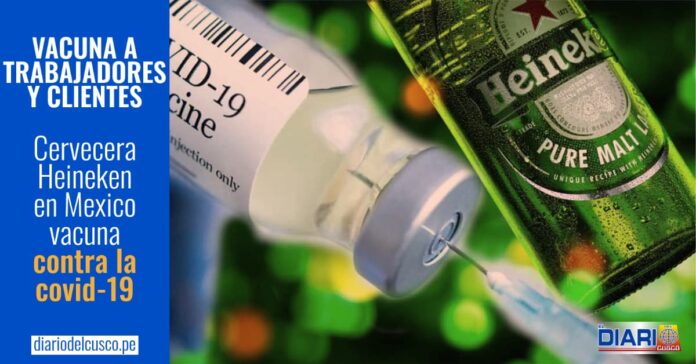 The Heineken México brewery will vaccinate its employees and the general public in Monterrey, adhering to the government’s national plan.

The Heineken México brewery became the first large company in the country to collaborate in the vaccination against Covid-19 by immunizing its employees and the general public at its headquarters, in the city of Monterrey.

Heineken, which in Mexico has seven beer-producing plants and a malthouse with 16,000 employees, began with the vaccination of its workers, families, dependents, and merchants at its facilities, according to an internal statement that transpired in the press.

The inoculation, with the AstraZeneca drug, is in coordination with the federal government, so the company must respect the vaccination plan, which at this stage corresponds to people aged 40 years or more, and open the service to citizens, in general, this Saturday and Sunday.

Although Efe tried to contact Heineken México to clarify the origin of the drugs and to know the number of doses available and employees benefited, initially there was no response.

Later, he shared an informative notice in which he stated that the Cuauhtémoc y Famosa Society (SCYF), a private charity associated with the brewery, made its physical infrastructure with hospital capacity available to the federal authorities.

“With the intention of joining, in a decided way, the extraordinary work carried out by said authorities within the National Vaccination Strategy,” SCYF indicated.

Outside its facilities in the center of Monterrey, the second-largest city in the country, it has been possible to observe personnel arriving on foot or by car, in one of the drive-thru modules.

Mexico, with 126 million inhabitants, is the fourth country with the most deaths from Covid-19, accumulating almost 230,000 confirmed deaths and more than 2.4 million infections.

For this reason, the government has bet on early access to the vaccine of various drugs, with a total of more than 35 million doses applied so far and 14.6 million people who are fully vaccinated.

President Andrés Manuel López Obrador authorized the private sector to buy the drug in January with the condition of respecting the national plan, which until now has covered the elderly, health, and educational personnel.

Given the shortage of the drug, only maquiladoras on the northern border have vaccinated their employees in key municipalities, such as Ciudad Juárez and Tijuana, but with vaccines donated by local governments and US businessmen.

The Business Coordinating Council (CCE) and the Employers’ Confederation of the Mexican Republic (Coparmex) have expressed that they hope that within the next few months, with greater availability of vaccines, the Government will allow them to collaborate in immunization to accelerate it.

Heineken’s collaboration has attracted attention in Monterrey, where the original company was Cervecería Cuauhtémoc Moctezuma, founded in 1890, and a subsidiary of the Dutch company since 2010.

The beer industry in Mexico, the largest exporter of the beverage in the world, was one of the most affected by the pandemic, as it closed during the health emergency decreed by the Government in March and April of last year.