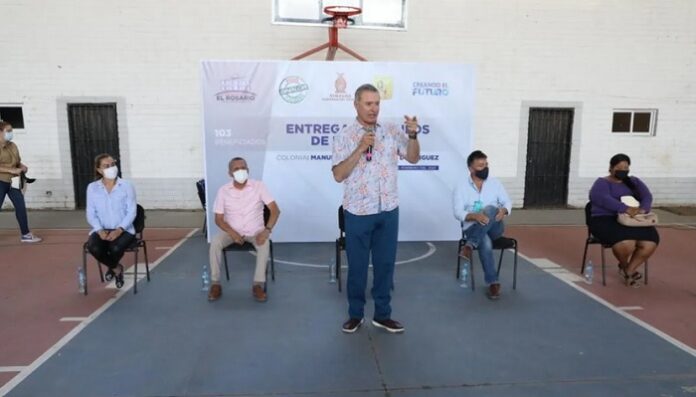 The governor of Sinaloa delivered 103 property titles to the inhabitants of the Manuel Pineda neighborhood and announced the conclusion of the Laguna de Oxidación in Agua Verde.

Rosario, Sinaloa (Feb. 22, 2021).- With a direct investment from the Government of the State of Sinaloa, of almost 15 million pesos, Quirino Ordaz Coppel announced that in a period of no more than three weeks, the reconstruction of the bridge in the Monte Alto community, in Rosario, will begin. This bridge collapsed due to the lash of the rains caused by Hurricane Willa back in October 2018.

The foregoing was announced by Governor Ordaz Coppel in the framework of the symbolic delivery of 103 property titles, which come to give legal certainty to 460 people from the Manuel Pineda neighborhood, who had more than 10 years waiting to be served justice, where he also said that Melchor Ocampo avenue will continue, in addition to the Laguna Oxidación in Agua Verde will be completed and the paving of streets in Apoderado and Pozole will be delivered, which makes an investment of approximately 50 million pesos.

With the Monte Alto bridge, the aim is to safeguard human life, since in the rainy season the river overflows and leaves more than 6 thousand inhabitants of Chametla, Apoderado, El Pozole, and Chupaderos cut off.

Quirino Ordaz Coppel announced that in the sum of the efforts of the State Government and the City Council, 7.4 million pesos were invested to introduce basic services of electricity, drinking water, and sanitary sewage for the benefit of the families that live theres.

“My congratulations to all the beneficiaries because for years they made a great effort to manage the authorities and today they see the dream of having certainty about their homes and properties finally crystallizes,” he emphasized.

For his part, Mayor Manuel Antonio Pineda Domínguez thanked the governor for his support for the people of Rosario, and more so for being a special day, in which the more than 100 families who waited for more than 10 years to have legal certainty, and now, they actually own their land and a lot of work will need to be carried out.

On behalf of the beneficiaries, Mrs. Cristina Nayely thanked the governor for the help provided to obtain the property titles, with which they will be the owners of a part of the municipality of Rosario, so it was worth the wait because they will have a better quality of life.

When making use of his voice, the director of CVIVE, Salvador Reynosa Garzón, said that the instruction of Governor Quirino Ordaz is very clear, and it is to give legal certainty to families, as well as help them build their heritage, for which he reported that an investment of almost 6 million pesos in 60 bedrooms and 30 roofs.