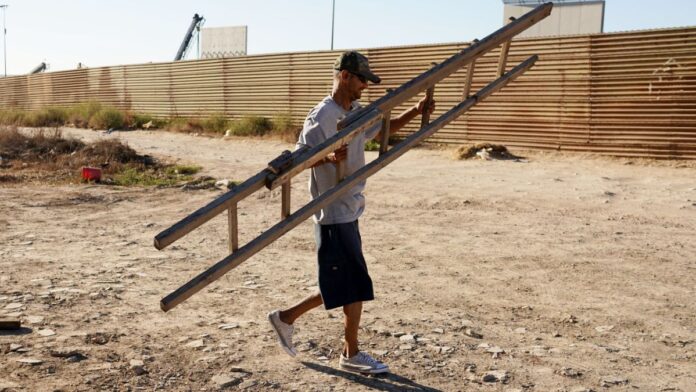 In the images you can see at least five migrants and those who are helped, presumably by “polleros”. | Photo: Getty Images – Archive

With a ladder and in less “than a rooster crows,” a group of migrants managed to climb the border wall between Mexico and the United States.

This action, which lasts less than 5 minutes, was captured on video and has immediately gone viral on social networks.

The migrants were captured on video and in the images you can see their expertise to cross the border wall and run towards the United States.

With the help of the ladder, the migrants managed to cross the border wall and run into US territory.

During the video you can see how the migrants climb the wall using a ladder.

This action requires concentration and skill, as the wall rises several meters high and a wrong step could be dangerous.

As the subjects climb quickly, a man below and on the Mexican side holds the ladder that is apparently made of ropes.

In the images you can see at least five migrants and those who are helped, presumably by “polleros”.

They support a ladder, while migrants, carrying bulky backpacks, climb quickly to cross the wall.

From the other side, the polleros watch as the migrants manage to cross , who immediately run into the bush on the American side without, apparently, being seen by the Border Patrol.

Although it is not the first time that migrants have been observed crossing the border wall, users of social networks highlighted the time in which they managed to do so to avoid being arrested and also pointed out how easy it is to cross, despite the fact that presidents like Donald Trump sought to shield the border to avoid the passage illegal migrants.