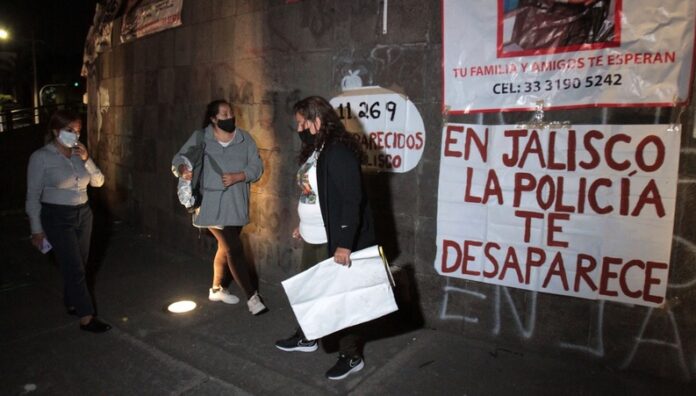 Guadalajara, Jalisco.- The re-victimization, lack of empathy, lack of results, and the abuses by the Jalisco authorities towards relatives of missing persons, made the group Familias Unidas por Nuestro Desaparecidos en Jalisco (Fundej) announce that as of this Wednesday it permanently installed a demonstration outside the Jalisco Institute of Forensic Sciences (IJCF).

“Being 12 noon on February 10, 2021, mothers and relatives of our missing in Fundej communicate that we will be here day and night until we receive an answer to our requests, we are not here for pleasure,” said Guadalupe Aguilar, spokeswoman of Fundej, before dozens of people who have relatives whose whereabouts are unknown, and were gathered outside the IJCF.

The activist, who has been looking for one of her children for 10 years, affirmed that a response to genetic confrontations, results of DNA tests, hiring of personnel such as experts, geneticists, doctors, and anthropologists is required in order to properly analyze all the segmented body parts found ”.

“And if someone from organized crime is listening to us, we ask that if they have already been killed someone, leave them where we can find them because we are mothers looking for our children,” she added.

She then she named dozens of the disappeared, while the protesters responded all at once in each case: “Present.”

The group reiterated that the sit-in will be permanent 24 hours a day, with relays, and will remain active until all their demands are met.

The start of the sit-in and announcement of Fundej coincided with the presence of the International Caravan in Search of the Disappeared (Caravana Internacional en busca de Desaparecidos), which arrived in the state since last Sunday, made up of relatives of the disappeared who, although they reside in other parts of the country, were seen for the last time in Jalisco.

The members of the caravan have also been at the IJCF since Tuesday to carry out identification tasks, accompanied by the State Search Commission to try to support them in the procedures and their work of locating missing relatives.