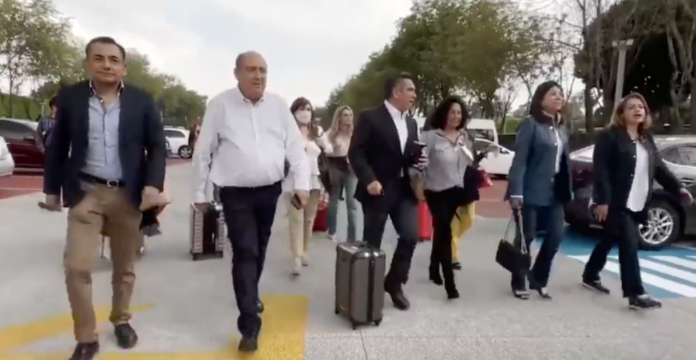 Opposition deputies will sleep in the Chamber of Deputies to prevent protesters from preventing them from entering.

To prevent demonstrators from preventing them from entering the Chamber of Deputies tomorrow, legislators from the “Va por México” coalition -PAN, PRI, PRD- are meeting in the San Lázaro legislative precinct to spend the night in the chamber.

The first to arrive with suitcases were the PRI legislators. Led by their leader Alejandro Moreno, 70 of 71 PRI members arrived at the lower house to vote against the energy reform tomorrow.

Meanwhile, the 15 deputies of the PRD are also already in the Chamber of Deputies to sleep there.

The coalition has indicated that it will vote against the electrical reform of Andrés Manuel López Obrador, so it would not pass, since it is necessary that at least 334 deputies vote in favor of it, in case all 500 attend.

“It is incredible that we are in a country in which, if you have an idea, as good as it may be, but different from that of the President, they consider you a traitor to the country and that loyalty to the country is what a person says”.

Telcel crashes throughout Mexico, what we know about the failures of its service