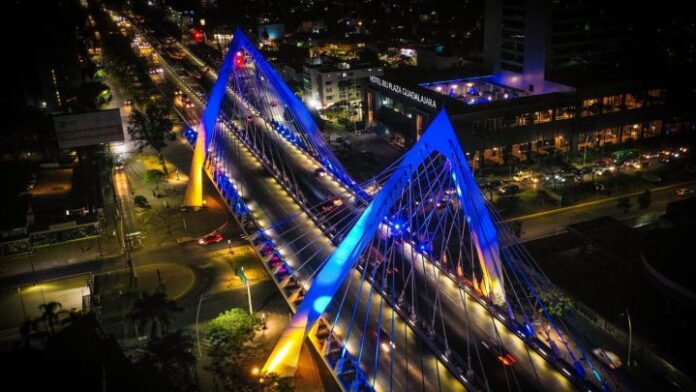 Various monuments and buildings in Jalisco and Nuevo León were illuminated with the Ukrainian flag. The Embassy of that country thanked the gesture.

After Russia decided to invade the nation led by Volodímir Zelensky, many countries have shown their solidarity, and Mexico was not far behind, as several buildings and monuments were lit up with the Ukrainian flag, which has asked many territories for weapons to counterattack.

And it is that a week of the war has already passed, which has left many dead and hundreds of wounded. Although most nations try not to get involved in the war of these two regions, the pleas of the Ukrainian people have stirred up opinions among the powers, which could bring something bigger.

The states of Jalisco and Nuevo León were the entities where support for Ukraine has been glimpsed, since several of its monuments and buildings were illuminated with the colors of the flag of said nation. It was placed in places of local traffic, vehicles, and even in some government buildings with the aim of highlighting its position regarding the Russia-Ukraine war.

Through its social networks, the Embassy of Ukraine in Mexico thanked the gesture by these two entities headed by Enrique Alfaro and Samuel García. Different images were shared through government accounts.

“History has given us the hardest and cruelest lessons, in every corner of the planet, that wars will never be the right thing to do, that the walls that divide us have to come down and change for bridges of understanding and respect, not for deaths, weapons, tanks or hate… Violence is not the solution. In Jalisco, we stand for peace, respect for the sovereignty of Ukraine and solidarity with the victims, regardless of their nationality, of this conflict whose political or economic interests cannot be above life,” Enrique Alfaro wrote.

On the other hand, the government of Nuevo León illuminated the State Government Palace with the Ukrainian flag. On the facade, you can see the colors blue and yellow, while the lights of the city at night adorn the city of Monterrey.

AMBER ALERT: Ian disappeared in Taiwan and could be in Mexico