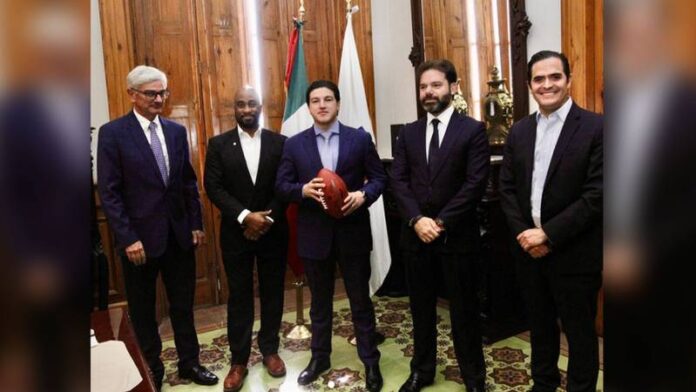 Arturo Olive, general director of NFL Mexico, was present at the announcement that the governor of Nuevo León published on social networks.

This Friday, Governor Samuel García announced the construction of a new stadium in Nuevo León and also assured that the NFL games will return to the state.

Through his Instagram account, the Monterrey politician shared the news: “Coming soon the NFL and a new Stadium in Nuevo Nuevo León,” he wrote in the post.

In the images that accompanied the announcement are Mauricio Doehner, Nuevo León’s Secretary of Economy, and Arturo Olive, general director of NFL Mexico.

It should be noted that in previous weeks, Samuel García revealed that the Club de Tigres stadium would be built next to the ‘Volcán’ Universitario, the venue where the team plays its local matches.

The governor of Nuevo León clarified that the old stadium would remain in operation until the new sports space is inaugurated. He also pointed out that if necessary, while construction is underway, local clubs (Tigres and Rayados) can share the pitch.

Another teenager is reported missing in Monterrey, Nuevo León

From January to April of this year, 52 women have disappeared in Nuevo León, according to the National Search Commission