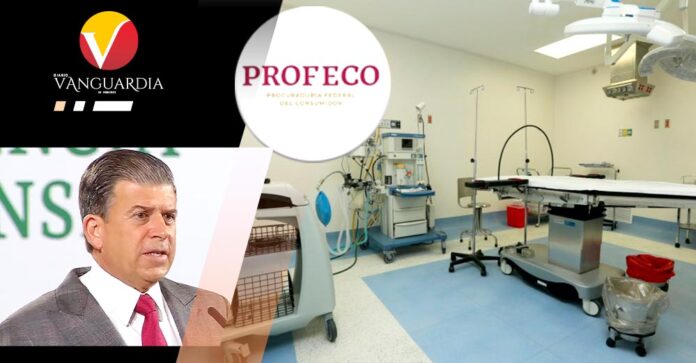 Covid-19 is the claim that has cost insurers the most, with $ 2.484 billion between 2020 and 2021, even higher than the previous record of $ 2.4 billion due to Hurricane Wilma, in 2005, the owner reported. of the Federal Consumer Prosecutor’s Office (Profeco), Ricardo Sheffield Padilla.

During the morning press conference, in the section “Who’s who in prices”, he said that in the last three years, insurance companies detect an increase in prices to the public of hospitals and hospital service providers between 15 and 20 percent, compared to inflation in those same years of between 2.83 and 5.59 percent.

Private hospitals incur differentiated charges when they are insured, usually higher, and when the consumer is in that situation, private hospitals tend to prescribe unnecessary tests.

“On various occasions, the diagnosis considers conditions different from the real ones; there are abuses in the collection of medicines or used instruments, and some hospitals ask for a deposit without informing the insured, or for amounts greater than the deductible ”, he specified.

He cited five insurers that account for 53 percent of the claims initiated, mainly due to refusal to pay compensation and disagreement with the time for payment thereof.

He reported that between January 2019 and August 2021, Profeco has received 437 complaints against hospitals, clinics, and sanatoriums nationwide.

In the last three years, the provider with the most complaints is Operadora de Hospitales Angeles, whose main reasons for complaint are improper charges, refusal to make reimbursements, and for refusing to provide the service.

It is followed by other chains such as Star Medica Hospitals, MGI Medical Group, Christus Muguerza Hospital Systems, and Medical Center for Rheumatic Diseases.

Meanwhile, from January 1, 2019, to September 25, 2021, Profeco has attended 418 citizen complaints against hospitals and clinics, in this case, the providers with the most complaints are: Hospital Star Médica, Operadora de Hospitales Angeles, Hospitales Médica South, University Hospital Center and Northeast Medical Center.

“However, from January to date, the average number of complaints before the Condusef by these insurers is around 100 complaints per month.

Who are the insurers that have the most complaints? MetLife de México, has 12.6 percent of complaints; Quálitas follows and third place is held by Grupo Nacional Provincial “.

The main complaints and reports in this area are for not displaying prices, not respecting the displayed prices; improper, excessive, or unjustified charges; not having an adhesion contract, refusal to provide the service, and refusal to make refunds.

We recommend to the user, added the Consumer Attorney, that the hospital has the price list; that explains the way to return the deposit, the prices of medicines and supplies, that the service contract is registered in Profeco.

How to legalize your foreign plated car in Mexico- Without Spending a Fortune!

Should you stock up on some products? Mexico facing shortages of basic food items