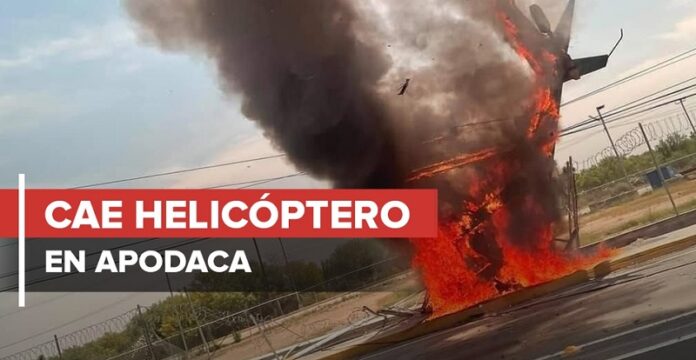 MONTERREY, NUEVO LEON (April 23, 2021).- A helicopter fell in the municipality of Apodaca, Nuevo León and later caught fire on kilometer 19 of the highway to Laredo, in circulation from north to south, where one person died.

Agents of the Civil Force arrived at the place, who guarded the area on one side of the military camp. Miguel Ángel Perales, director of Civil Protection, explained that according to the first reports, one person died in the accident.

“For some reason, it suffers from a problem and collapses in this part, the helicopter was approached by a single person. Right now in the place, a lifeless person is confirmed inside the aircraft. The aircraft practically falls on the sidewalk between the slow speed lane division and a business.

“Unfortunately there is a person that lost his life, until now, what we have preliminarily is that only one person specifically addressed, the capital of the helicopter, and there was no other passenger in the aircraft,” he mentioned.

According to the aircraft’s registration, it was reported that the owners are Mexican, it left the North Airport and was heading to a private heliport in Monterrey when it collapsed at approximately 1:21 p.m.

In an interview for Telediario Mediodia, Alejandro Tovar, director of Civil Protection in Apodaca, said that the highway to Laredo was the most affected in terms of roads, so it is recommended to take alternative routes.