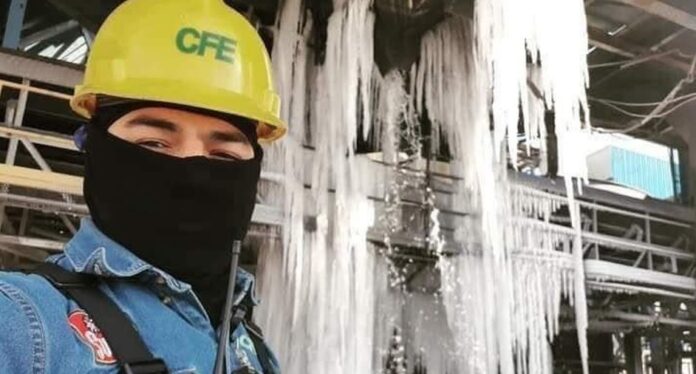 It is the largest coal-based thermoelectric plant in Latin America. Annually it delivers a generation of 10 million 300 thousand megawatt-hours.

The Termoeléctrica de Carbón II located in Nava, Coahuila, is frozen but its workers keep it operating after temperatures reached 9 °Celsius below zero (15° F), in the last two days, which has caused blackouts in communities in the border area of the state.

Workers of the Federal Electricity Commission (CFE) work at a forced march, between frozen corridors and ice stalactites in order to keep the 4 units that make up the Central operating, to supply electricity to at least three states.

During the night of Sunday, Feb. 14th, Coahuila, Tamaulipas, Chihuahua, and Nuevo León reported snowfall in different regions, which continued until Monday, and together with a winter storm in the state of Texas, the north of Mexico is facing the most severe winter in 30 years, millions of people in the United States and Mexico were left without electricity.

The problem began at 7:48 am on February 15 when there was an “imbalance between the load and the generation in the north and northeast of the country,” as explained by Cenace México, the operator of the National Electric System.

The impact was calculated to be 6,950 MW. But the fact that the Termoeléctrica de Nava had frozen, which caused that many communities in the region were at times without electricity supply, being the second large-scale built in Mexico. It uses non-coking coal as its primary source of energy.

The Power Plant is part of the North Regional Production Management and delivers the energy generated to the Northeast Control Area through the 400 kV Lampazos I and II transmission lines, as well as a link with the Río Escondido substation at the same level of voltage.

The four generating units have a capacity of 350 MW each, for a total of 1,400 MW. So it is currently the largest coal-based thermoelectric plant in Latin America. Annually it delivers a generation of 10 million 300 thousand megawatt hours.

Nava is a municipality very close to the border with the United States, Nava and is part of the coal-bearing region, which became, almost a century and a half ago, into a highly coal-producing region, at the same time as the laying of the railway that crosses the state of Coahuila.

Currently, the coal region contains 95 percent of Mexico’s coal mineral resources, which are estimated at 1.2 billion tons, a sufficient quantity to cover the demand of the CFE and the steel industry of Mexico.