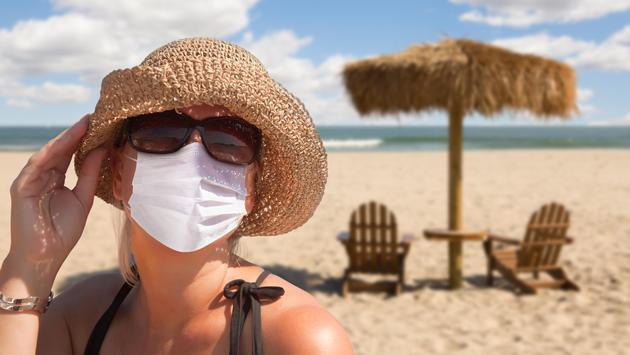 Although its land border with the US is closed to non-essential travel such as tourism, its airports never closed. Travelers arriving in the country are only asked to fill out a health form and their temperature is taken.

And although the vast majority of countries that were reopening their borders require negative covid-19 tests or mandatory quarantines to allow the entry of all travelers or certain nationalities, Mexico’s policy has remained the same.

According to the map of travel regulations for covid-19 of the International Air Transport Association (IATA), Mexico is one of the few countries in the world classified as “non-restrictive” along with others such as Afghanistan or North Macedonia.

In America, Mexico is the only country with such lax restrictions. Costa Rica, which lives mainly from tourism, does not require proof of covid-19 either, but it does require medical insurance for foreigners that covers the costs of treatment if the disease is contracted and accommodation in case of quarantine.

But Hugo López-Gatell, Mexico’s undersecretary of Health and a visible face of the government in the face of the pandemic, once again ruled out that the country will tighten the entry requirements for travelers.

“I want to reiterate that the position of the World Health Organization, consistent with the recommendations of the International Health Regulations, is not favorable to these measures,” he insisted on February 1.

In addition, he assured that the contribution that international travelers could have in the increase in cases of a country like Mexico that already has an active transmission of the virus in its territory “is frankly small”, even if they arrive from places with a high number of infections. .

“Among other things, because it is well documented that travelers are generally people with low risk or low probability of having active disease, precisely because in general, people do not travel when ill,” he said.

The Pan American Health Organization, however, warned on February 3 that infections and deaths from covid-19 in Mexico were increasing especially “in states that brought significant tourism in the Christmas season” such as Guerrero, Quintana Roo, Nayarit, and Baja California Sur.

The unique strategy followed by Mexico is debated by many in Mexico’s own medical sector.

“All countries are taking these measures to monitor and control the entry of travelers because they work and we must prevent contagions from entering. But Mexico does not want the damage that it would represent for tourism, for imports, for the country’s economy”, Laurie Ann Ximénez-Fyvie, a Mexican doctor in Medical Sciences, tells BBC Mundo.

“But if a scientist [López-Gatell] is saying that a very logical and proven measure does not work, then he is not speaking as an epidemiologist, is he? He is speaking like a politician, defending the position of the president who prefers not to make these health fences because he does not want to bear that cost, “says the author of the book” Irreparable damage. The criminal management of the pandemic in Mexico. “

Pierre, the young Frenchman who took advantage of this facility to enter Mexico to enjoy a vacation on the island of Cozumel, despite this, is not clear about his opinion on this lack of measures.

“I can’t tell you if they seem correct or insufficient. I suppose it will be because they need tourists in Mexico, so they don’t put restrictions like other countries, right?” Pierre asked himself.

Yes, there will be a “playazo” in Tamaulipas, it will take place in 2 municipalities!