In the coming weeks, the number of butterflies that enter the national territory will reach its peak.

The 2020-2021 hibernation season is approaching and on September 26 the first sightings of the butterfly were had in Acuña, Coahuila. Every year they travel more than 4 thousand kilometers from southern Canada to spend the winter shelter in the forests of Michoacán and the State of Mexico.

The sighting of the first specimens in the Braulio Fernández Park, on the banks of the Rio Bravo, was registered thanks to the citizen monitoring implemented by the PROFAUNA AC “Royal Mail” Program for 25 years.

According to the National Commission for Protected Natural Areas ( CONANP ), entry into the country on that date is extraordinary, since it has been classified as early. The urgency can be attributed to the climatic conditions of winds, rain, and humidity that the eastern United States presented with the entry of Hurricane Delta into the country. 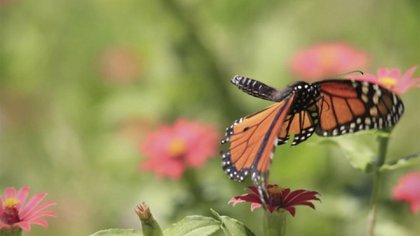 On their way, the lepidoptera can be observed in forests and green areas of the states of Michoacán, State of Mexico, San Luis Potosí, Querétaro, Hidalgo, Tamaulipas, Coahuila and Nuevo León. In these places, the species perches on trees and bushes to rest, hydrate and mate. Their food is obtained mainly from the nectar of the polocote.

It is expected that during the week larger groups of the Monarch butterfly may be observed entering through the border with the United States in more regions of Coahuila as well as in the states of Nuevo León and Tamaulipas. The CONANP invites the public to “observe the sky, gardens and green areas around to record the passage of the Monarch through our territory.”

The Oyamel forests used by the Monarch butterfly to spend the winter are located 3,000 meters above sea level. They migrate from Canada to the region of Michoacán and the State of Mexico because the geographical conditions of the region give them the necessary conditions for their survival during the winter. 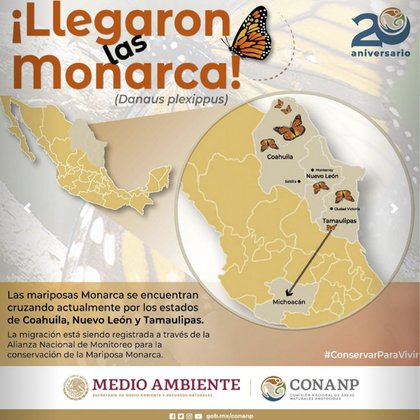 It is estimated that in the coming days the Monarch butterflies will appear in larger numbers in more froterizo states (Photo: CONANP)

The Monarch Butterfly Biosphere Reserve is located in the municipalities of Temascalcingo, San Felipe del Progreso, Donato Guerra and Villa de Allende in the State of Mexico, and Contepec, Senguío, Angangueo, Ocampo, Zitácuaro and Aporo in the state of Michoacán. It covers 56,259 hectares and is an area destined for the migration, hibernation and reproduction of the Monarch butterfly. In this sense, the region was declared a Protected Natural Area on October 9, 1986. Later, in 2008, due to its enormous importance, UNESCO declared it as a World Heritage Site of Humanity.

The migration of the species is of utmost importance for the regions in its path. In its adult stage, the butterfly becomes an important pollinator. In this way they mobilize the pollen they find on their way and redistribute it in various regions. Thanks to this, the enormous genetic diversity of plants grows. Also, in its caterpillar stage, the butterfly feeds on the cottony mealybug, a pest that attacks a huge number of plants.

During the last decade, according to the “I am Monarch” website, populations of the species have declined drastically . In 2013 , the smallest population was registered in the entire decade. This decrease is due, to a great extent, to the deterioration in environmental quality and, of course, has serious ecological consequences. 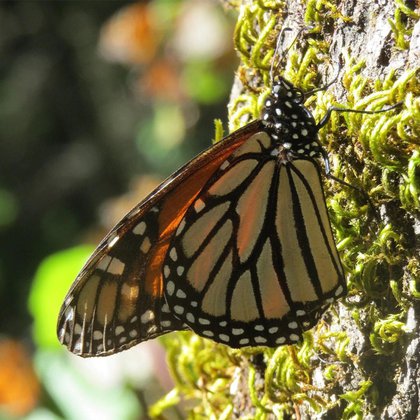 Despite their toxic nature, Monarch butterflies are consumed by some predators and parasites (Photo: CONANP)

During this hibernation season, CONANP, as well as PROFAUNA A. C’s “Correo Real” Program, invite citizens to participate in the #ProtegamosALasMonarca campaign to monitor and help trace their migration route. Registration can be done through applications developed for Android and IOs.

In the same way, they make the page SoyMonarca.mx available to expand knowledge about the Monarch butterfly.