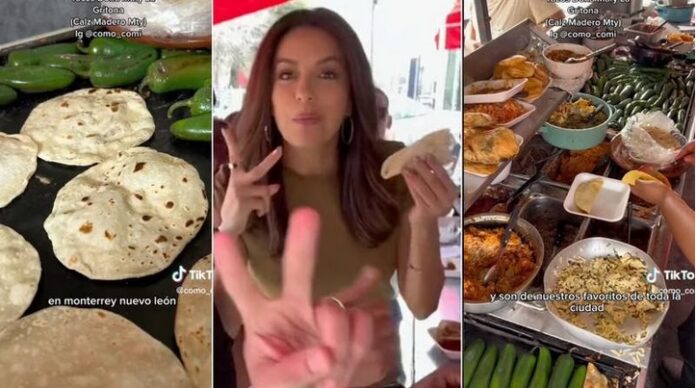 Eva Longoria, an actress of Latin descent, has shown her taste for gastronomic diversity in Mexico on more than one occasion. Her culinary route has included states like Jalisco, Oaxaca, and Nuevo León; She has also been accompanied on her tours by other celebrities such as Jared Leto.

A few days ago she returned to Monterrey to taste stew tacos from a famous establishment called Tacos Doña Mary La Gritona.

The reason why Longoria has been seen in different cities of the Mexican territory, in addition to his predilection for the traditional cuisine of our country, is due to the filming of a project entitled Searching for Mexico on CNN Plus, a documentary in which he narrates several gastronomic and cultural trips.
Eva Longoria and her predilection for Mexican food

The actress and businesswoman has taken on the task of exploring dishes from various states. Through her social networks and her fan posts, she has revealed some of her moments in typical places.

In February 2022, Longoria ate the quintessential Guadalajara appetizer at the Tortas Ahogadas El Príncipe Heredero establishment, whose owners “brought off” the actress’s visit.

“Today we had the honor of receiving the great actress Eva Longoria, it was a pleasure serving her, thank you very much for her preference,” they wrote on her Facebook account.

At the end of the following month, the producer made a ‘stop’ at the Monterrey food market known as Mesón Estrella, where she toured the food aisles and tried pork rinds.

She later visited a craft brewery in the streets of the Old Quarter and was seen at the Marco Museum facilities.

She now returned to the capital of Nuevo León to try Doña Mary’s stew tacos. It was through the TikTok account @como_comí that the actress’s ‘stop’ at the venue was revealed.

In the opening scene of the clip, Eva Longoria can be seen at the taco stand tasting one of the dishes while she greets the camera.

“Eva has four in corn with regular Coke standing on a bench,” says the driver as a brief introduction to the review.

After a visual tour of the options at the local from Monterrey, the host of the video blog shows a few of Longoria’s interactions with diners.

“Eva, how did you do?” asks one of the young people, “Incredibly with you guides, thank you” commented the actress with genuine enthusiasm.