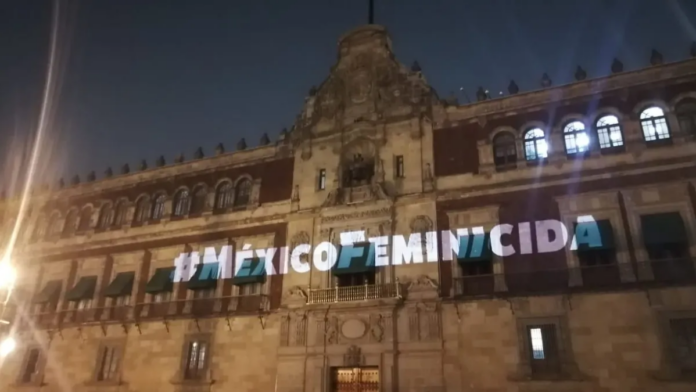 Femicides will stop with a better society says AMLO

President Andrés Manuel López Obrador assured that femicides in Mexico will stop when there is “a better society ” in the country.

In the morning conference at the National Palace, López Obrador pointed out that the problem of the origin of violence against women was the prevailing neoliberal model for a long time, where values ​​were no longer promoted and the material was promoted.

And you can say ‘but how do you stop femicide’ because it stops like this, with a better society, that’s the basis, “he declared.

“The fault is the prevailing model, they stopped promoting principles, values, they wanted to overshadow the entire life system inspired by our cultures, in our great civilizations, by a materialistic, individualistic, selfish system,” he argued.

“Then, the loss of spiritual-moral cultural values, coupled with the lack of opportunities, impoverishment, inequality, caused or led us to a decline, it was a process of progressive degradation, that is a decline. It had a crisis and what has to be done? Well, change that model, ”he pointed out.

On Sunday, thousands of women protested in various marches in the capital to demand justice for the alleged femicide of Debanhi Escobar, an 18-year-old girl found dead in the cistern of a motel in the state of Nuevo León after two weeks missing and whose case has caused a stir. in the country.

Debanhi’s death has caused national outrage due to the image that went viral of her abandoned on the road by a taxi driver who allegedly harassed her, and due to the alleged failures of the Nuevo León Prosecutor’s Office, which first investigated the case as an accident.

Debanhi’s case has been seen as an example of the double crisis of sexist violence and disappearances in Mexico, where more than 10 women are murdered a day and there are more than 99,000 people who have not been located since 1964, according to government figures.

Despite these data, the Secretary of Security, Rosa Icela Rodríguez, highlighted that in March there were 34.8 percent femicides less than the historical maximum of August 2021.

Just as it happened in Venezuela, in Mexico a very clear script is followed that curtails the freedoms of citizens, critics of the government

Mexico is experiencing profound structural changes, the likes of which have not been seen in decades. The arrival of AMLO to the presidency of the Republic has represented changes in all areas, and whose main objective is the hyper-concentration of power in the person of the president. Not good for democracy and its system of checks and balances.

Just as it happened in Venezuela, in Mexico a very clear script is followed that curtails the freedoms of citizens, critics of the government, civil authorities, the free press, opposition parties, and businessmen.

But how did AMLO do this in just 2 years? What strategies did you use? Here we do a review of the script followed by the so-called Fourth Transformation.

The Mexican Army has been invited to participate in more than twenty activities that do not correspond to it. The Mexican Constitution in its article 129 states that in times of peace no military authority should exercise functions that are not related to military discipline.

But today the Army is building the new airport in Santa Lucía, State of Mexico; building 2,700 branches of the Banco del Bienestar, supports the remodeling of hospitals. In addition, it controls customs and ports, assists in the tree planting program, and provides support for the contingency plan against Covid-19.

It also distributes medicines, medical equipment and even textbooks.

He even went to rescue the tyrant Evo Morales from Bolivian justice in November 2019, by military plane.

And as if that were not enough, he transported the ashes of the famous singer José José from Miami to Mexico. The Army is also participating in vaccination.

All these spaces are not given to the armed forces without a government strategy. It is about having the uniformed men on your side politically, to intimidate the opposition, dissuade it from any attempted uprising, and above all, to keep the olive green bubble happy, which is now involved in so many businesses.

The militarization of everyday life heralds the end of democracy. An open and authentically democratic regime, on the contrary, opens spaces for citizens, for civilians. But in Mexico, Morena goes the other way around. Military control is essential to limit freedoms and threaten critics.

AMLO has suggested, as of June 2020, the intention to close nearly 100 autonomous organizations, because according to his accounts it is very expensive to maintain them, and his cabinet, through the secretariats, could absorb all the functions that such organizations operate today. .

Pretending that the federal government itself is the one that performs the functions of autonomous organisms is absurd. They were created to evaluate the government, to prevent injustices, and abuses, and to be a counterweight to power.

And also, to express an opinion, to put locks, to withdraw the influence of the government and that it does not act as judge and party, as it has done in the elections.

That is why it is very worrying that the National Electoral Institute (INE) is constantly intimidated and pressured by the government. When the INE is manned, we will totally say goodbye to democracy in Mexico.

The Energy Regulatory Commission (CRE) and the National Institute for Transparency, Access to Information and Protection of Personal Data (INAI) are also at risk.

The Morena faction is the majority in the current Chamber of Deputies. And to this is added that it has satellite matches. All bend to the presidential will, and come to not change “not one comma” to presidential proposals. This hurts democracy, which is transformed into autocracy.

Hence, for the elections on June 6, Morena is doing everything possible to maintain the majority, since the main bet of the united opposition is to take away this strategic advantage from the “fourth transformation.”

The Judiciary, for its part, has also had, unfortunately, hints of subservience to the Executive. Although it is still the hope to preserve democracy.

The Morena government is not betting on winning the elections with good reason. Not even with emotions. That is not necessary when you have a fat checkbook and you are only interested in looking good with the poorest people, with those of the popular class who are your electoral base.

For this reason, the government has raised its electoral success in the delivery of support through 17 social programs, to which a total of 323,000 million pesos are allocated, a year, about 16,150,000,000 dollars.

Support is given to young people who neither study nor work, known as “ninis”, for example. 3600 pesos per month. But yes, scholarships for university students, who often also work, are reduced to 2,400 pesos. The government rewards those who do nothing, more than those who make an effort.

And there is also support for older adults and peasants to plant trees, which has been criticized because it rather encourages their felling, in order to later collect the support by planting again.

Those who deliver the money from the programs into the hands of the beneficiaries are known as “servants of the Nation”, or rather, “servants” of the Nation. This is an entire army of 21,300 people, spread out and operating throughout Mexico, but distributed with electoral criteria, not combating poverty, as it should be.

Therefore, these “servants” are more from Morena than from the Nation. And they wear vests identical to those of that party, which makes it almost impossible to distinguish one thing from the other. They have already been vaccinated, to facilitate the electoral and propaganda operation that they should not do. And paid for with our taxes.

The “nationalism” promoted by the government really is not. This is socialist statism. If it were actually nationalism that drives, the government would not scare away national companies, private initiative, for example, from investing in the energy sector.

But what he really seeks is to control such a sector, deprive the investor of his interests, and that the state hand is the only one. That is not nationalism, it is socialism.

Nationalism is privileging nationals over foreigners, putting Mexico above all else. But here they get confused and put the State above all else, shielded by the narrative of “nationalism”.

It is a false nationalism, which from the outset excludes nationals from productive life, and not only from the energy sector, since the government quite frequently attacks companies that it does not like, for not rowing in the same direction as its “4T ”.

It is an ideal, a dream, nothing more. No country in the world is self-sufficient. Even the most developed countries like the United States or China import food or energy. Mexico, much more.

That is why the energy reform that the Mexican government is seeking is not really seeking for the country to be self-sufficient in the energy it consumes, but to exclude foreign companies because they are supposedly there to “plunder” natural wealth, as well as to exclude national companies.

This is by no means acceptable, because national sovereignty is not the same as what the government is trying to do, which is to have absolute control of energy production in Mexico. That is not sovereignty, but socialism. Sovereignty, in any case, nobody has been able to achieve in the world.

The electricity reform and the hydrocarbon reform have been two attempts of the Fourth Transformation to take control of energy, concentrating power in the State.

Federal legislators in Morena attempted to pass 48 constitutional reforms that were widely criticized by the opposition, the Catholic Church, Christians, and non-governmental organizations.

That package was described as a real outrage by progressivism, in favor of abortion, and against the natural family, religious freedom, and private education. This is where the 4T is totally in tune with the progressivism of the Democrats, Biden and Kamala Harris, as well as globalism and its instruments.

Too often, AMLO uses his morning conferences to attack opponents, to reveal private issues, such as his contracts, which are legal even if there are those who do not like them. The critical press suffers a great attack in Mexico, by the government. Also, citizens and business leaders.

Once AMLO takes them down from his stellar microphone, bot farms complete the job and attack whoever the president has targeted that day. Freedom of expression and human rights, are in danger. And this transcends more and more, outside of Mexico.

AMLO has tried to forge strong relationships with presidents of Latin American countries with leftist governments. He does various kinds of favors for them and thus builds leadership at the regional level, a new Latin Americanist Red Axis.

Bolivia, Argentina, Cuba, Nicaragua, and Venezuela, were led by the Latin brother from the north. They operate largely through the Community of Latin American and Caribbean States (CELAC), which, among other things, seeks the departure of Luis Almagro from the OAS, whom they consider opposed to his leftist ideology.

In the context of the recent executions and femicides across Mexico, and given the limited response of the Mexican State to guarantee the safety of the population, apply the law and combat organized crime that defies the state and its institutions, it is necessary to return to the question of whether Mexico is a failed state. Below we reproduce various opinions that have been expressed on the subject.