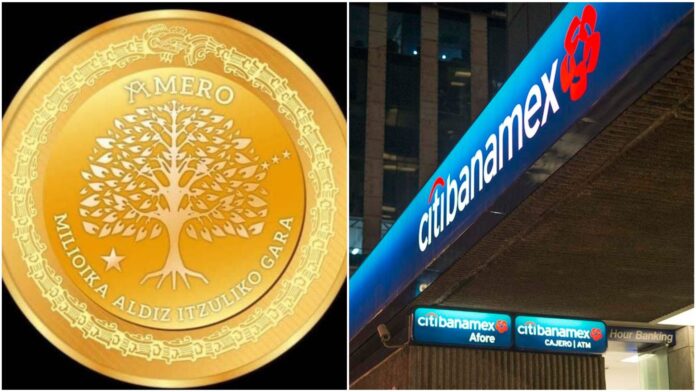 The director of the Isatek company, Alfonso Jiménez Pérez, offered $ 16 billion of his cryptocurrency Amero to buy Banamex.

A company located in the city of Monterrey seeks to create the first hybrid bank in Mexico and for this, it has offered 16 billion dollars in cryptocurrencies by the financial entity Banamex

On Tuesday, the Citi firm, which bought the Mexican bank in 2001, revealed that it will leave consumer banking and corporate banking from CitiBanamex, as part of its new strategic vision.

This Thursday, through a statement, the firm Isatek expressed through its executive director, Alfonso Jiménez Pérez, its interest in acquiring the assets of Banamex and launched the first offer, for 16 billion dollars in its cryptocurrency Amero, to create the first hybrid banking entity in Mexico.

The leader of the cryptocurrency firm made its offer known once Citigroup put Banamex up for sale, as part of its plan to close commercial banking operations in Mexico.

The businessman pointed out that they are attentive to know “how much would be the amount for the purchase, in cryptocurrencies, of the financial institution”, whose assets for sale include its branches, Afore, insurance company, debit and credit card business.

He pointed out that in financial circles there are versions of offers for Banamex, between 13 and 14 billion dollars, so “Isatek raises his hand with the first offer for 16 billion dollars in cryptocurrencies.”

According to private analysts, Banamex’s business would reach up to 15 billion dollars as it is the fifth-largest player in the Mexican financial market.

Jiménez Pérez said that with the transaction he tries to “expand the foray into the financial market of Isatek, the promoter of Amero, the Mexican cryptocurrency backed by real estate for an amount of 60 billion dollars.”

He recalled that now that the Bank of Mexico is going to create its own cryptocurrency, Isatek wants to “venture into hybrid banking” and added that “worldwide, hybrid banks are being formed and traditional banks are now involved in cryptocurrencies.”

This Thursday, President Andrés Manuel López Obrador requested this “to return Banamex to Mexico” after the American Citigroup announced that it will close its retail banking operations in the country, which includes the Citibanamex brand.

In addition, the president “celebrated” that the magnate Ricardo Salinas Pliego, owner of Banco Azteca, “has expressed his interest in buying it.”

And he considered that “the same could be thought” of Carlos Slim de Inbursa, Carlos Hank González de Banorte and José Javier Garza Calderón and a group of investors from the northern state of Nuevo León.