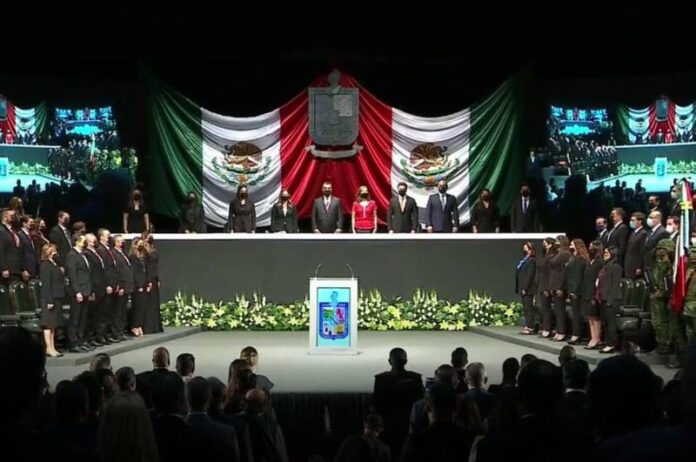 MONTERREY, NL.- On his first day in office, the entity’s governor, Samuel García Sepúlveda, generated controversy on social networks for his decision to change the state’s coat of arms, from which he eliminated the slogan “Semper Ascendens” (Always Ascending), written in Latin on a ribbon with the national colors, which also disappeared.

Likewise, the new administration withdrew from the shield the phrase “State of Nuevo León”, which was replaced by “The Government of the new Nuevo León”, as if the heraldic symbol were representative of the current government and not of the State.

But he also gave a partisan stamp to his decision, since the green, red, white, gold, and blue colors, which pigmented the different elements represented in the original shield, were replaced by a single tone between orange and brick color similar to the one that characterizes the Movimiento Ciudadano political party, which championed the new governor.

The design of the shield of the new government simplifies the elements of the original and eliminates others, such as the various weapons embodied around the shield.

According to Mercedes Marianella’s investigation, initially the state used the Monterrey shield until its own was approved by a commission made up of historians and chroniclers, Carlos Pérez Maldonado, José P. Saldaña, Santiago Roel and Héctor González. through Decree 72, published in the Official State Newspaper on June 2, 1943.

The elaboration of the drawing and the shield was entrusted in the same year 1943, to the artist Ignacio Martínez Rendon.

Padilla pointed out in an article on the subject that: “The Nuevo León coat of arms is the State coat of arms that represents the history, customs, and values ​​of the Nuevo Leon people. This was established in the Official State Newspaper on July 10, 1996. The shield reflects the strength, progress, teamwork, and courage of the Nuevo Leon ”.

After protesting as governor of Nuevo León on Sunday night, and moving with his wife Mariana Rodríguez to the Government Palace, this Monday morning, Samuel García protested and handed it over to members of his cabinet.

Among them was the head of the Comptroller’s Office María Teresa Herrera Tello, who was the first woman president of the Superior Court of Justice of the State and served as legal advisor to former president Vicente Fox and head of the Agrarian Reform Secretariat in the Guanajuato cabinet.

Herrera Tello said García Sepúlveda, “is a strong, honest, courageous woman with a deep responsibility for the state.” He added “she will help us make the government of the new Nuevo León the most transparent.”

He also protested the former president of the Civic Council Javier Navarro Velasco, as the new Secretary-General of the Government, of whom he said, is an excellent lawyer and an international benchmark in arbitration, negotiation and conciliation . With whom, he pointed out, “we are going to build the new Nuevo León with empathy, listening and agreeing with the people.”

And since “we want to build the # NuevoNuevoLeón with stability, I also sent a request to @CongresoNL to ratify Carlos Garza Ibarra as Secretary of the Treasury. We are going to take care of the finances of the state with seriousness and responsibility ”, concluded García Sepúlveda.