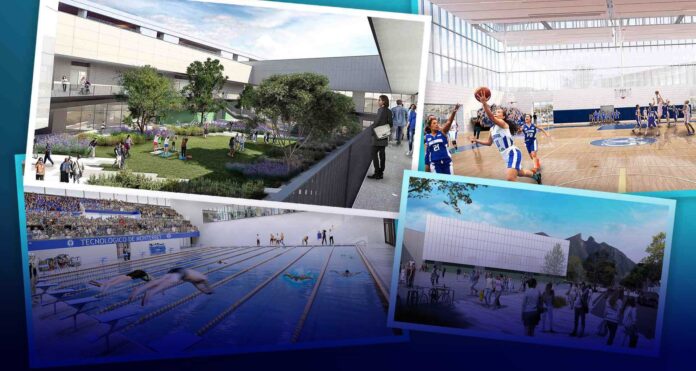 Monterrey, Nuevo León.- The Tecnológico de Monterrey professional and postgraduate students inaugurated the facilities of the gym for Basketball and Volleyball, of the new Wellness Center, which consists of 12,915 square meters, dedicated to promoting the culture of integral well-being and sports.

It is located where the Technological Stadium was located and is part of the transformation of the Tec District, in the south of Monterrey. According to the Tec de Monterrey Conecta news site, in this project that began in March 2019, an investment of 30 million dollars is estimated and will be completed this year.

“The project is developed as a sports center composed of a series of buildings around a distributor atrium that connects and distributes athletes and visitors without crowds, and clearly directs them to the different destinations of the architectural program,” said José Luis Graue, director of Constructions in the North Region.

The Wellness Center is divided into four buildings: one of them for the recreational gym; in another enclosure is the semi-Olympic pool of 25 by 25 meters, with space for 350 spectators, 8 lanes, 8 touch plates, and 8 Led reaction plates that allow detecting if a swimmer has gone ahead, as well as a mega screen.

There is a climbing wall, offices, and areas for CrossFit, yoga, aerobics, martial arts. They also have a nutrition center, space for racquetball, a spinning area that allows virtual routes, a fitness area, and a terrace.

During the presentation to the press, the vice president of the Monterrey Region of Tec de Monterrey, Mario Adrián Flores, commented that the event “was attended by members of the Hall of Fame, the Board of Directors who supported with a relevant investment to change the area, along with the Tec District team, all with a vision of transformation ”.

For his part, Sigifredo Treviño, Athletic and Sports Director in the Monterrey region, explained that the Wellness Center was built to motivate and develop sports, promote physical activity in many environments, such as relaxation, low-impact exercises, combat, yoga, swimming, team games, and high impact exercises.

The work and development of this sports complex are added as a fundamental pillar to the 2030 vision of Tecnológico de Monterrey to enhance human flourishing, which is linked to the TEC21 Educational Model, which will allow an academic training of excellence, indicated the directors of the Tec de Monterrey.