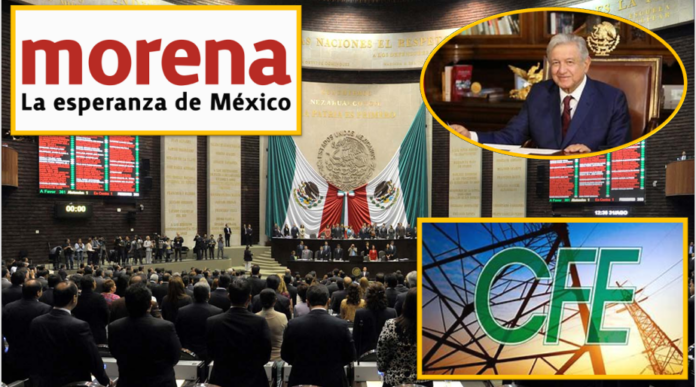 The endorsed opinion of the reform initiative prioritizes the dispatch of power plants by the Federal Electricity Commission (CFE).

The Chamber of Deputies generally approved the opinion that modifies the Electricity Industry Law (LIE) with 304 votes in favor, 179 against, and 4 abstentions. Legislators made 412 reservations.

The proposal to reform the LIE was sent by President Andrés Manuel López Obrador (AMLO) to the San Lázaro legislature, where it was approved by the deputies of Morena without any modification.

The endorsed opinion modifies the order of priority for the dispatch of power plants and gives priority to the Federal Electricity Commission (CFE) over private companies.

It also obliges the Energy Regulatory Commission (CRE) to review and invalidate the electric power self-supply permits obtained, where appropriate, through “acts constituting fraud to the law.”

During the discussion of the reform, the deputy for the PAN María de los Ángeles Ayala pointed out that these reforms would violate international commitments such as the USMCA. He pointed out that this minute cancels the fulfillment of seven of the UN Sustainable Development commitments, which is to guarantee access to affordable, safe and modern energy and “condemns us to the consumption of fuel oil.”

“The way to strengthen CFE is through investment; that is, make this company more competitive with infrastructure, technology, and investment. It has been demonstrated that the CFE has healthy finances, “said the PAN.

The PRI deputy Claudia Pastor mentioned that the reforms are a violation of Article 28 of the Constitution, since “the even floor” is taken away from all generations of electricity by favoring a company.

He explained that with the changes it is no longer the cheapest energy that will determine how the electrical system works, but with the change in the law, one of the competitors is privileged.

Meanwhile, deputy Benjamín Robles Montoya, of the PT, pointed out that with the modifications to the LIE they are to “overturn the misnamed energy reform and today we begin with the electricity reform, so we must tell all the people: we are not coming to rob them, we come to give you everything ”.

The deputy for Morena María de los Ángeles Huerta, from Morena, assured that with the modifications to the LIE the “savage looting protected by a law that could only be approved by corruption and the lack of patriotism on the part of the representatives will stop. legislation of the neoliberal governments of the past. This reform eliminates a market distortion that was made to favor individuals to the detriment of citizens ”.