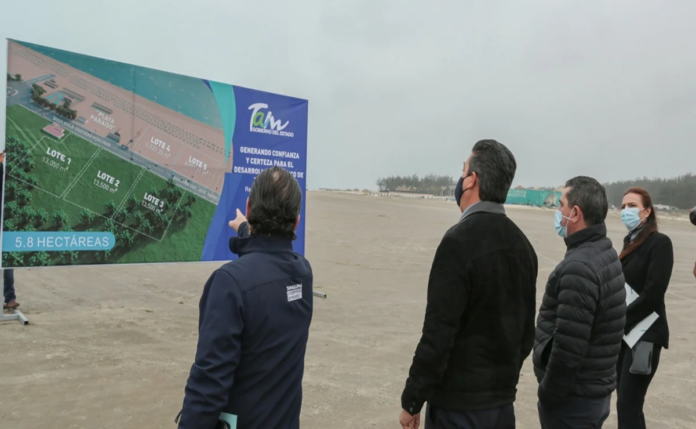 Francisco García Cabeza de Vaca was on Miramar beach with legal representatives of the state government and the Secretary of Tourism, Fernando Rivera Rocha

Francisco García Cabeza de Vaca announced this morning that the state government recovered a territory of 5.8 hectares located on the coastal boulevard of Playa Miramar in Ciudad Madero, which were illegally in the hands of private individuals.

The president warned that “this is only the beginning of the recovery of land in the coastal area, we are going for many more, many more hectares that we are going to recover in favor of Tamaulipas.”

Francisco García Cabeza de Vaca was on the Miramar beach with legal representatives of the state government and the Secretary of Tourism, Fernando Rivera Rocha.

Representatives of the tourism sector from the southern part of the state were also present at the event “Generating Confidence and Certainty for the Economic Development of Tamaulipas.”

The governor mentioned that the recovered land will be used for hotels, condominiums, and commercial projects, in order to strengthen tourism activities in the region.

“We are writing a new story for the south of Tamaulipas, it is an act of justice for Tamaulipas, an act that closes the door to impunity,” added García Cabeza de Vaca.

The Tamaulipas Secretary of Tourism, Fernando Olivera, pointed out that more than one billion pesos will be invested in these lands for tourism developments.

Confidential sources indicated that the recovered hectares had been stolen by individuals during the administration of former governor Tomás Yarrington, in complicity with former officials of that six-year term