Mexico registered 847,108 accumulated infections of COVID-19 and 86,059 deaths caused by the disease

Mexico registered 847,108 cases of accumulated COVID-19 infections . In addition, since the beginning of the epidemic, the country has suffered 86,059 deaths. There was an increase of 5,447 infected in the last 24 hours, as well as 355 deaths.

In a press conference from the National Palace, the director of the National Center for Preventive Programs and Disease Control ( Cenaprece ), Ruy López Ridaura , pointed out that with the trend in estimated cases, a “plateau” in the epidemic curve is being entered , after several weeks of decline in the epidemic.

He explained that the states of Aguascalientes, Coahuila, Colima, Chihuahua, Mexico City, Durango, Nuevo León, Oaxaca and Zacatecas reflect an increase in the estimated cases during the last two weeks and some entities remain on a plateau after their increase.

“The national curve at the end is a mixture of the curves of the 32 states and it is expected that some will maintain ascents and others will decrease. In these states we are working intensely to be able to achieve the measures that are required so that this ascent becomes a plateau or that it descends ”, he explained. 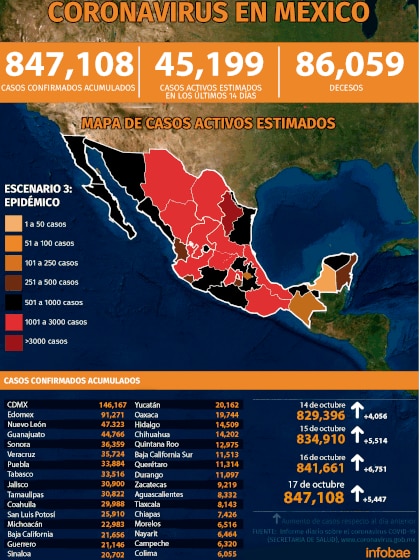 In this sense, he recognized that an important participation of the epidemic is by young people , since they are the most mobile population. For this reason, he called on them to be aware that although they have a lower risk of complicating the infection, they can increase the chain of transmission.

Likewise, it indicated that the real cases could amount to 983,791, of which 45,199 are active , so that Mexico City is the entity with the highest number of active cases, followed by Nuevo León, Jalisco, State of Mexico, Guanajuato , Coahuila, Querétaro and Durango as the entities with more than 1,000 active cases and which together account for more than half (59%) of the active cases in the country.

In contrast, Chiapas and Campeche have the lowest number of active cases, registering less than 60.

However, we must not forget the 10 entities with the highest number of cases: Mexico City, State of Mexico, Nuevo León, Guanajuato, Sonora, Veracruz, Puebla, Tabasco, Jalisco and Tamaulipas, which together make up almost two thirds ( 63%) of all accumulated cases registered in Mexico. 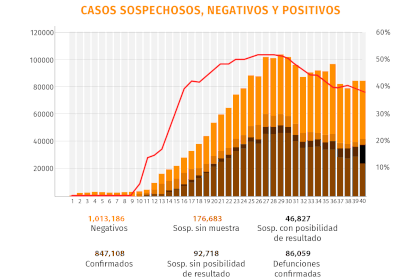 Regarding deaths, López Ridaura pointed out that since week 25 there has been a continuous decrease in deaths associated with the SARS-CoV-2 virus; at the moment -24% is registered in the occurrence of them.

According to the daily technical document, so far, there are 14,692 suspected deaths of COVID-19 that include those pending by laboratory (n = 2,388) and those that are in the process of association-clinical-epidemiological opinion (n = 12,304) in SISVER.

Continue to rank the City of Mexico, the State of Mexico, Veracruz, Puebla, Baja California, Jalisco, Nuevo León Sinaloa, Guanajuato and Sonora as the 10 entities that have registered the highest number of deaths, which together account for more than half ( 63.2%) of all those in the country.

On the other hand, Aguascalientes, Durango, Colima and Baja California Sur register the lowest number of deaths associated with the coronavirus, having less than 740. 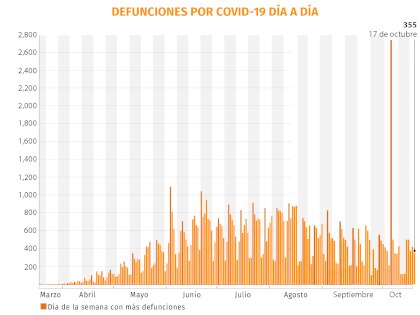 Chihuahua surpassed Nuevo León as the entity with the highest percentage of beds that are being used, with 59%. 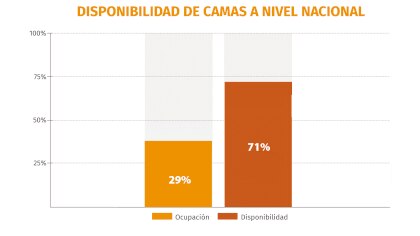